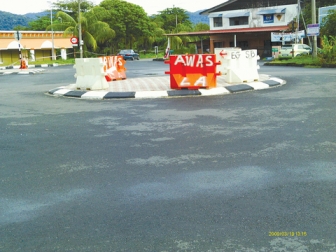 The following comment was posted by Ken back in 2nd September 2015.

It was a case of car accident in Ipoh town, Perak.

The accident happened at a roundabout.

Incidentally, many new drivers find it difficult to negotiate a roundabout.

Accident between a Mitsubishi Triton and Perodua Kancil

Thanks in Advance Cikgu Yap.

I had a Accident yesterday in Ipoh.

We were at a 4 exit “round about” both me and the other driver (malay lady with 3 kids) we begin at the same exit i was on the inner right lane she was on a outer left lane.

When we were in the “round about” i exit on the 2nd exit she on the 3rd exit (she claims) as she was on the outer lane i crashed into her.

We were side by side but i was in a triton and she was in a car similar to kancil.

I am not sure but i am pretty certain if your on the outer lane of the “round about” you need to exit on the 2nd exit.

Else its too dangerous for all the other drivers.

So i hit into the drivers door.

Door was dented in glass was broken otherwise not other damages human or car.

As for me the car just had some paint scratch.

So we wanted to make a police report.

My mom told me it was going to cost 300 and if both wrong both fine 300 so we agreed to settle it without report by paying a small amount for the damage.

Problem now is this. We only agree verbally to do it without police report.

I will get her to sign a mutual agreement form today.

1) if she has already reported will this agreement still work?

2) is it possible to report to police but ask that no action be taken? i have the photo with the cars and damages.

My response to Ken

Unfortunately, not many can go into a roundabout and negotiate it properly.

If the lady makes a police report, then your original idea cannot work.

I am doubtful if police will agree with your suggestion.