Even before the week was over, mini market trader, Subramaniam Gopal of Lancang, Pahang, was recharged in Temerloh on 4 charges again for conducting his business without a license.

He was again given a discharge, not amounting to an acquittal. This led Suhakam’s chairman, Tan Sri Abdul Talib Othman, and a former Attorney General to conclude, “It appears to be a harassment of this man”.

When the first newspaper reported this landmark case the week before, it was suggested, driver issued with summonses by local authorities all over the nation could ignore and begin to throw away summons by local council, for example Dewan Bandaraya Kuala Lumpur (DBKL), Majlis Perbandaran Shah Alam (MPSA) and other local authorities all over the country. 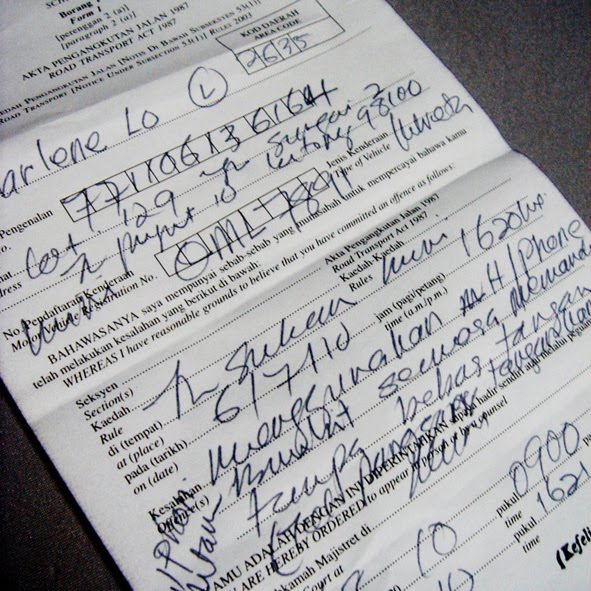 Fearing some unwarranted repercussions might occur if many drivers were to take the above advice seriously, I advised drivers to hold on to their summonses a little wee longer to see how the situation would unfold.

I even went a step further as to advise that existing summonses be settled rather than to be thrown away.

Hundreds, if not thousands of summonses have already been issued and paid up, under the Local Authorities Act since its inception way back in the 1950s or 60s.

The local council or the government, is not going to sit back and accept Judicial Commissioner Akhtar Tahir’s judgement that that he agreed with trade Subramanaim Gopal’s contention that Section 120 of the Local Council Act was unconstitutional.

What would have happened if a driver had thrown away his summons?

Well, it would have caused some unwanted problems to the driver himself at least.

First, the driver would have to take a day’s leave and visit the offices of the issuing authorities to get another copy of the summons involved. The above would have taken some time and certainly a lot of hassle.

Remember, under the Local Council Act, a local authority can take legal action against a driver for ignoring summons issued against them.

As mentioned earlier, the local authorities are not ready to have the act challenged by someone so easily.

Three days after trader Subramaniam’s release, the Lanchang Municipal Council had already issued fresh summons for the same offences Subramaniam was said to have committed.

As we await, the results of the latest court action by the Lanchang Municipal authorities , drivers are once again advised to quickly settle the summons they are holding on to.

Do not forget, there is a time limit for you to settle your summons. After that, you could end up being hauled to court.

Holding on to your summons without paying it will create tension and worry in you. Human beings are such that they tend to worry over things they haven’t done, which in fact they should have done.

Is a small amount of money such as a simple summons worth all the above worry?

Do think about it carefully. Go settle your summons immediately. Tomorrow, if you can. Be a good and responsible driver.

Many examples have shown the local government eventually will succeed in whatever court case they bring up to the courts of law. That is the situation in the country today.

Whether you like it or not, the Local Council Act is here to stay. And for a long, long while yet.

And in final reminder to driver, Penang state local government and traffic management committee chairman, Chow Kon Yeow said, “responsible citizen should either acknowledge their fault by settling the fine, or if one is not satisfied, they can make an appeal or fight it out in court”.