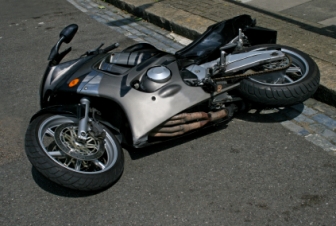 In this article, I thought of sharing a comment from Adam posted back in 29th October 2015.

This is a case of an accident between a car and a motorcycle in Malaysia.

An accident between a car and a motorcycle

Seek for your advice urgently.

I was banged by a car in Seapark a month ago 29th Oct 2015 around 1pm (my first traffic accident which involve 3rd party).

I am motorcyclist driving in straight lane.

It’s a double lane and I drive right hand side lane because I just cross the road from opposite petrol station.

I was bumped by a myvi car without any notice as I didn’t see the car.

Same to the car driver claim that she didn’t saw me but she claim that I bumped her car.

The car driver immediately call her boyfriend to help her solve the problem.

My hand was injured and I a bit lost conscious after I fall down which I didn’t ask for the driver name and IC.

The car driver then just went off and left her boyfriend to deal with me.

He sent me to the nearest clinic just opposite the road accident then he told me he had a urgent meeting with his company and leave me with his name card and then walk away for his own business.

The clinic doctor arrange a X-ray scan to check on my shoulder and been told that my bone were fine.

No fractures nor broken but I got told her that my arm is very pain.

But the girl doctor told me that is soft tissue injury and it’s normally painful and take time to heal.

The guy then call me at evening and ask about condition and offer me private settlement.

He is willing to pay my medical fees and repair my bike and I tell him I will re-considered about his offer as he sound very sincere.

Due to the firm answer from the clinic doctor that my shoulder bone are fine which make me trust her professional skill so when the guy call me again the next day to ask me if this case can solve privately then I agreed due to the doctor judgement.

I went back to follow up in the same clinic after two days and again i tell the same doctor my arm still can’t lift up and she answer me the same statement just like 2 days ago.

Since my arm is fine and he is willing to pay medical fees and the bills for my bike.

He then show up in the panel clinic there and pass me RM150 as treatment fees and apologize to me and giving promise will give any help and support if needed.

My bike was sent to the nearest workshop which he know the workshop owner to repair my broken bike.

I don’t even know what is damage part they have repaired.

I was go seek help for chinese medication and therapy with my own money and I have spend more than he RM300.

I got went for second opinion after 2 weeks in my hometown clinic but due to the first clinic didn’t give me the X-ray copy.

The doctor advice me to check with specialist since my arm still can’t lift up and suspect it could be nerve problem.

I didn’t go for specialist immediately as I got unsettle task in my company.

I’m re-visit the panel clinic 2 days ago and ask for reference letter to Assunta hospital.

The doctor react shocked after I told her I still can’t lift up my arm and she tell me it could be nerve problem.

I then told her my bone in my shoulder look imbalance but she calm me down that it’s I’m losing muscle that’s caused it look obvious.

She then pass me the X-ray film for my shoulder and reference letter then I immediately make an appointment with the orthopedic surgeon.

The moment the doctor look at the X-ray film that I handed him from clinic and he told me your bone in the joint of your shoulder are broken.

I feel shocked as I been told that my bone were fine ever since the accident happened.

The doctor advice me to do a CT next day and he can look closely on my problem.

I then immediately call the guy since he got offer me will support if I need help.

Then he told me to do the CT scan as per doctor consult and give him update.

I have done my CT scan yesterday and from the CT scan report show my bone have fractures.

The ball like joint bone obviously are broke into 3 pieces.

Doctor advise must do operation asap as it already a month after the accident to avoid I miss the golden time to cure my shoulder and been told I can’t perform my work at least 3 months as it takes time to heal.

I then call the guy again to share my condition and hoping he might show the support he promised.

He then talk like the case should be close file after I accept the treatment fees he gave.

Again, he accuse me is the fault side coz i bumped her girlfriend car which is not true.

I then shout back that if a motorcyclist bump a car with full speed then he should fall in front but I was fall on the side and caused my shoulder injuries.

He then realize he can’t turn the fact then tell me that I can’t bear the cost of your operation fees.

I then tell him I don’t expect you to pay full but I want him to support which ever charges exceed my personal insurance coverage but he told me he is just a worker and can’t pay if the amount is 3k or 5k.

He told me should lodge a report at the time and not accept his offer but who know I was misjudge by the clinic doctor.

I thinking to lodge a report now since I can feel he doesn’t want to support me for this matter and I’m the elder and my partner both retired.

I can’t even think if my company can’t pay me salary after I use up my mc and leaves yet I still need to suffer for the medical bills.

Kindly advice what action I can do now?

My response to Mr. Adam

After studying your case, I’ve concluded that you have suffered rather extensive injuries to your physical well being.

According to your physicians, it looks as if your arms, elbow and shoulder have been either dislocated or even broken in some places.

In short, you seem to be suffering from extensive pain.

An accident such as the above indeed a complicated one.

As such, it is of my opinion, such incident just cannot be settled between the motorcyclist and the lady driver and her boyfriend.

Verbal discussion between both parties will not go far and in my personal opinion, not always binding.

A time will arrive when the other party, that is the car driver involved, will turn around claiming that “they” can no longer afford to pay for your injuries.

As said earlier, the only solution is for you to seek proper medical treatment immediately.

Most important of all, secure a solicitor’s assistance as soon as possible.

The possibility of such a case being brought up to the courts, is as we only say, uncertain.

But from what I see, your chances of securing compensation from the incident appears rather remote.

The incident has happened quite a long while ago.

To get the services of medical personnel and solicitors is going to incur quite a lot of money, let alone time as well.

That is all I am able to advise.