When compared to the world’s largest producers of automobiles, such as Toyota, Nissan, Ford, Subaru, Renault, Honda etc. Proton Malaysia maybe a small and insignificant maker of world cars. Nevertheless, “little things” do sometimes go on to achieve great strides.

One of Proton’s latest green or “electric” cars, the Proton Exora REEV won in the “most energy efficient multi purpose vehicle” category at the 2011 Future Car Challenge, held in London. Readers may wish to know exactly, what is REEV? REEV actually denotes Range Extended Electric Vehicle. 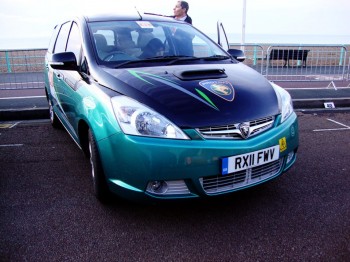 The Proton Exora REEV, was declared as the joint-winner with Toyota’s Prius plug in petrol hybrid as the best overall range extended vehicle. All in all, some over 70 vehicles, half of which were running on electricity, took part in a race which started in Brighton, England.

The latest race was said to be organized by the Royal Automobile Society (RAC). But unlike other previous races held, the “Future Car Challenge” competition was not about finishing first. Rather, the above race organized by the RAC or Royal Automobile Club of England, was intended to confirm and verify which vehicle could use the least amount of energy to cover the distance of 92 km, which started in Brighton, which is located at the southern tip of England.

For your information, the Proton Exora REEV is an electric vehicle that is developed in co-operation between Proton Malaysia limited and Frazer Nash Research limited of England.

Both the Proton Exora REEV and the Proton Persona REEV, are reported to be powered by a 70 kW motor which is backed up by a small petrol engine, which kicks in with the sole purpose of recharging the lithium ion battery pack. As a matter of fact, the Proton Exora REEV was declared as the eventual winner in 2010 in augural challenge of the Future Car Challenge.

The win by Proton REEV in 2011 surprised all quarters including Proton Malaysia itself. Datuk Nainuddin Che Din, Proton’s Project Manager, said that Proton Malaysia was rather confident of doing well in this year’s competition.

Fraser Nash’s director for regional operations, Mr Gordon Dixon, reiterated that Proton’s win proved that his company’s faith in electric vehicles which are in fact, he said, platforms for the future.

Proton Malaysia meanwhile, announced that electric cars by Proton, will be made available to the general public by the year 2013. Hurrah for Proton’s success and achievement. All Malaysians are indeed proud of your achievement.

5 of Proton’s “green” vehicles of the Proton Exora and Persona Series are currently being tested by a few governmental departments of the Malaysian government. The results will be known shortly.

Proton Malaysia’s latest success in Brighton, England, will go a long way in making both the EXORA REEV and the PERSONA REEV and tremendous success in a few years’ time. This augurs well in Malaysia’s attempts towards building a better and cleaner environment all rounds.