Removal of Broken Down or Abandoned Vehicles in Malaysia

Removal of Broken Down or Abandoned Vehicles in Malaysia

I have been a driving school instructor for over more than 40 years. However, it has to be admitted that my knowledge pertaining to the Road Transport Ordinance (RTO) 1987 is rather limited.

Many motorists, it is believed, do not realize that the above is also known as Act 333 is followed extremely rigidly by the Road Transport Department or the Jabatan Pengangkutan Jalan (JPJ). Of course, I know that a driver who wishes to secure a Class D driving license, has to attain 17 years of age before he or she can apply to drive a car.

To drive a motorized vehicle, one has to possess a “license”. Failing which, a person can be charged under Section 26(1) of the Road Transport Act 1987.

And also, I am also aware that to “take part in illegal motorcycle races” or “merempit motor”, as the youths of our country call it, contraverses Section 81 of the Road Transport Ordinance (RTO) 1987.

Amongst some of the punishments embedded in the above section is a fine of RM2000. The “machine” or ‘motorcycles” used in such illegal races can even be “confiscated” by the authorities. 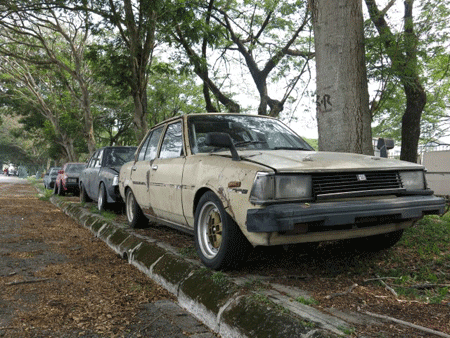 As a motorist, have you ever asked yourself this. Do you know anything about the “Removal of Broken Down Vehicles or Abandoned Vehicles” which we often see along our highways, expressways and even in busy, town areas in places such as Kuala Lumpur, Petaling Jaya, Johor Baru, Ipoh and Georgetown?

Have you ever pondered over this subject in your many years as a driver?

My limited knowledge regarding this section of the Road Transport Ordinance 1987 or Act 333, has finally led me today, to endeavour writing about Section 65 of the above act. Hopefully this article will render immense assistance to all drivers and motorcyclists alike.

In future, it is hoped, you will know what to do should your vehicle break down or is involved in an accident and therefore has to be abandoned along the expressway or a busy thoroughfare.

Some 15 or 20 years ago, my younger brother, B.K. Yap, now 57 years, unfortunately met an accident along Jalan Haji Sirat, near Klang Utama Housing Estate. His wrecked motorcycle, a Suzuki model, was removed by the police authorities from the scene of the accident.

Before this, I had always hold the contention that vehicles involved in an accident, could not be removed from the scene of the accident. Unless of course, the removed was authorized by the police.

But the funny thing was, in the accident that involved my younger brother, the removal of “his” motorcycle from the scene of the accident, was carried out by a motorcycle dealer nearby.

Did the motorcycle repair shop in reality, have the right to do what he did?

At that particular time, I felt that he didn’t.

How wrong was I! This showed how IGNORANT I was then regarding Section 65 of the Road Transport Ordinance 1987.

Read on, and you’ll shortly know what I mean.

Section 65 of the Road Transport Ordinance 1987 or Act 333, reiterated, that a vehicle “which causes obstruction to people or is an inconvenience to people and causes danger”, can be removed.

Who has the right to remove the broken down or abandoned vehicle?

Inafct, only 3 authorities possess the right to order the removal of broken down or abandoned vehicles. The relevant authorities are:

2) The Datuk Bandar or “Mayor” of cities like Kuala Lumpur or his men.

3) Along highways and expressways, without a doubt, it is the Director-general of the Highway Authority who can do this.

Coming back to the question of my younger brother’s accident which happened years ago, did the private motorcycle dealer, who obviously got the directive from the Klang Police Traffic Division to remove the wrecked motorcycle from the scene of the accident, have the authority to do what they did?

Reflecting upon it, infact they did.

Who can be directed to remove the broke down or abandoned vehicle?

Where can the broken down or abandoned vehicle be taken to?

The authorities, it is said can cause the above mentioned vehicle to be removed to some suitable place and there to remain at risk of the owner. Furthermore, the above vehicle can be detained until fees as may be prescribed under the Act of removal or detention is settled.

To whom are the public to pay the removal fees available?

Fees are payable to the Chief Police Officer, if removal was done by the police authorities.

And finally, payment can also be made to the Director-general of the Highway Authority of Malaysia.

Will there be any liability to be incurred by those removing the vehicle?

Unfortunately, the answer to this question is NO!

Section 65 of the RTO 1987 or Act 333, reiterates very clearly, a police officer, the Datuk Bandar and the Highway Authority of Malaysia, shall not incur any liability in respect to any loss or damage caused to any vehicle or the fittings and contents there of in its course of removal or while it is being detained, UNLESS such damage was caused NEGLIGENTLY or WILLFULLY.

What should the authorities detaining the vehicle do whilst they detain a vehicle?

The officer detaining a vehicle, with reasonable dispatch, must give notice in writing of such detention to the owner of the vehicle if the name/ address of the owner is known to him.

If such motor vehicle is NOT claimed by the owner within 3 MONTHS of its detention, the officer may, after giving 1 MONTH’s notice in the Gazette, of his intention to do so, sell by public auction or otherwise dispose off such motor vehicle and its load (if any), provide that no such notice be given in the case of any load of perishable nature.

Proceeds, if any, from such/ disposal, will be used to settle payments imposed under this Act. The surplus, is any, shall be paid to the owner of the vehicle and if not claimed buy the owner within 12 MONTHS after the date of sale/ disposal, shall be forfeited to the Federal Government, the Datuk Bandar or the Director-general of the Highway Authority as the case may be.

Finally, it should be borne in mind, that without prejudice, the powers of the minister under Section 66, the Datuk Bandar and the Director-general of the Highway Authority, may after consultations with the Minister impose fees for the removal of any vehicles from any road within the Federal Territory of KL and the detention thereof in accordance with this section.

Study this article well and hopefully it will be of some help to you as a Malaysian motorist! Eventually, I hope you’ll become a better and knowledgeable driver.