Preventing A Stalled Bus From Being Rammed From Behind

Preventing A Stalled Bus From Being Rammed From Behind

Accidents which involve tour and express buses, normally take place at night. It is proned to happen, especially after midnight.

An incident which took place in Johor, three students and their teacher, died when their tour bus developed mechanical problems and stalled along on expressway. They were then rammed into from behind by a sand laden trailer. 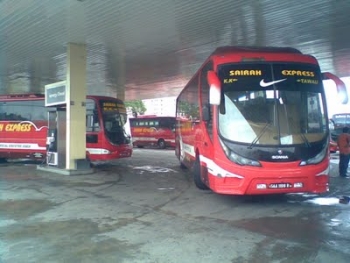 From the look of things, a broken down tour or express bus along our highways and expressways, stand a good chance of being rammed into from behind by oncoming trailers and lorries.

How do we prevent such things from happening?

After careful thought and considerations, I have come up with an innovative way to prevent such accidents from taking place. How then do we go about preventing trailers and large lorries from ramming into stalled tour and express buses?

What I wish to suggest to be done is this. In usual circumstances, tour and express buses have to place a small, red triangular warning sign or “amaran segi tiga” behind the vehicle, whenever it experiences a breakdown. This is to inform other motorists approaching from behind regarding the vehicle which has broken down or stalled.

The present red coloured triangular sign which is placed behind stalled tour or express buses are too small. They cannot be seen clearly enough in the dark. There in lies the danger.

At night, whenever a tour or express bus should meet with any eventuality, accidents or breakdowns, the driver concerned is advised to immediately install the triangular red warning sign, which is embedded into the back of the bus.

It is believed, that such a big, large warning light brightly lit up, would be visible in the dark at least half a kilometer away. With such a step taken, I am certain that trailers, lorries and other vehicles, would no longer land up ramming into rears of broken down or stalled vehicles such as tour and express buses. This would go on to prevent unforeseen and tragic accidents happening hereafter.

It is my urnest hope that the authorities study this proposal seriously. If possible, implement this idea the soonest possible.

“Coach” or “body builders” tour and express buses, should have little problem implementing the construction of the above large triangular warning sign without any difficulty at all.

We have the technologies and expertise to do it. Malaysia as they say, “Boleh”!