Dangers Of Starting A Manual Car From Outside

Dangers Of Starting A Manual Car From Outside

If you know how to drive, I’m sure you’ll understand that trying to start a manual geared vehicle from outside the car is something that should never be attempted.

Ideally, if a driver intends to turn the ignition switch of a car, in short, to start a car, he or she should in fact be seated at the driver’s seat in order to control the vehicle when it starts. However, a person using an automatic car will not face the same problem as would a manual vehicle.

An automatic car cannot be started if the gear is not placed in Neutral position. Therefore, an automatic vehicle cannot shoot off abruptly unless the driver engages the car in Drive gear. By comparing an automatic car and a manual car, we discover that as a matter of fact, it can be said that automatic cars are much safer.

Why am I trying to explain so thoroughly the starting mechanisms of a manual car?

On the 4th January 2011, a bizarre incident involving my wife’s colleague who lives in Pandamanan Klang took place. I will not reveal the person’s name in respect of their privacy. But there is a good lesson to be learnt in the bizarre incident.

For your information, my wife’s colleague uses a Proton Gen 2 as their family car. As the story unfolds, the Gen 2 was undergoing some minor repairs. The person repairing the car decided to start the car engine. That was a great folly. Years ago, I remembered my driving instructor, Mr. Tiew Hock Lai, advising me that one should never ever try to start an engine from the outside of a car. This action in fact can be very dangerous.

Even though I have been a driver for more than 40 years now, I have never attempted or dared starting the engine a car while being stationed outside the vehicle. Permit me to explain to readers the reason for my above fears.

Assuming that a manual car is not in neutral or free gear, the possibility of such things happening is very high. Some drivers fail to engage free gear after they have completed driving a vehicle. There lies the unseen danger. That was what happened to my wife’s colleague’s Gen 2.

On that fateful day, the Gen 2 engine was ignited from the outside. The car was in fact in gear. It does not matter which gear it was in, upon cranking the engine, the Gen 2 burst into life and surged violently forward.

Readers might wish to know, is it possible for a manual car to behave in this unusual manner? The simple answer is, indeed it could. The pictures below show the aftermath of the bizarre incident. 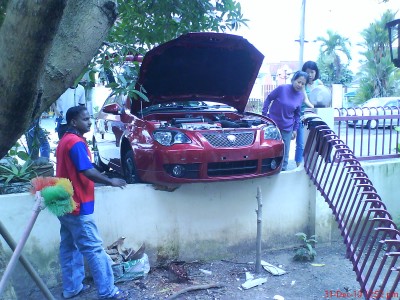 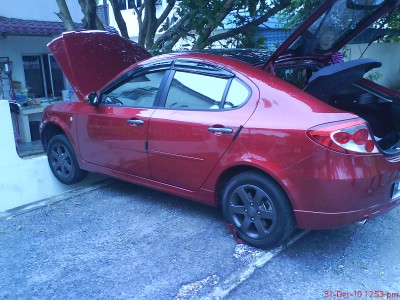 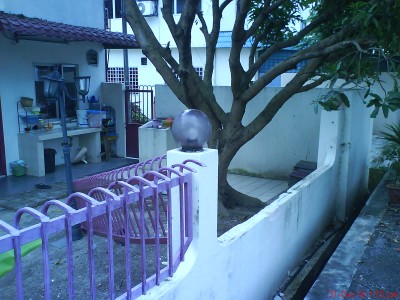 Aftermath of the bizarre incident

Permit me to explain what happened. The fuel pump of the car supplies petrol to the engine automatically. As the Gen 2 was then in gear, when its engine was cranked, even though there was no driver in the car to step on the accelerator pedal, the car began to lunge forward, nonetheless. Luckily, no one was injured in the incident.

The Gen 2 smashed and destroyed part of the owner’s automatic gate which was then partially open and moved uncontrollably towards a neighbor’s fence and crashing into it causing much damage. The car finally ascended the neighbor’s wall fencing and finally came to a halt on top of the brick wall.

All in all, my wife’s colleague had to reimburse quite a large sum of money to atone for the damages suffered by the next door neighbor. Again, luckily no one was injured.

I would like to remind all readers of this blog, do not attempt to start a car from the outside! This is dangerous! It is hoped that with this article, readers would have learned a valuable lesson. Please do remember, if you wish to start the engine of your car, make sure you are sitting at the driver’s seat to control the vehicle.