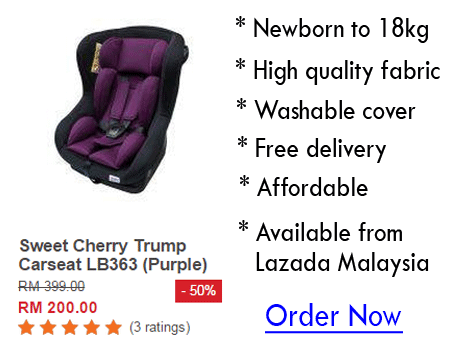 The Malaysian Association of Standards in its article which appeared very recently, stated that, according to the Malaysian Automobile Association or M.A.A., some 536,905 new vehicles are expected to be registered in Malaysia this year alone, including passenger and commercial ones.

Although, it is compulsory now for front and rear seat passengers to wear seat belts when driving in Malaysia, there is actually no law which makes it mandatory for children to be strapped down when travelling in vehicles with parents and adults.

Before we proceed any further with this article, a “seat belt” may just only be a piece of cloth but remember, this simple invention, does save lives.

The World Report on Road Traffic Injury Prevention states that more than 1.2 million people die and as many as 50 million people are injured on our roads everyday. It is expected that this figure will rise by about 65% over the next 20 years, if steps are not taken to prevent traffic accidents.

My reading and researches made prior to writing this article, discovered some very interesting and startling facts which I feel should be shared with the blog readers.

Readers might be surprised, that there are laws, when driving in other countries such as England, Australia, Germany and other European countries, which specifically insists the wearing of seat belts by the young.

In the United Kingdom, seat belts must be worn at all times by front and back passengers. Children under 12, must not sit in front seats. Except for infants or young children in baby or “booster” seats.
In Australia, seat belts must be worn by drivers and passengers all the time. In New Zealand, the law says drivers and passengers must wear seat belts or child restraints at all times, in both front and rear seats. Children under 12 years are not allowed to sit in front. They must be seated at the back. This is the regulation in Belgium.

In Finland, the law there says that seat belts are mandatory both at the front and rear seats. If you should be driving in France, do remember all passengers are mandatorily required to wear seat belts. Children under 10 years of age are not allowed to sit in front and must be seated at the rear with a seat belt tightly fastened.

When driving in Germany, drivers are reminded that seat belts are mandatory for passengers sitting both in front and at the back. There exists a fine, for each person not using a seat belt, on the spot.
The rule regarding seat belts in Portugal requires children under 12 years are not allowed to sit in front. Unless they are over 150 cm tall. Baby and booster seats are compulsory for children up to 12 years of age.

In Italy, children who are under 4 years of age are not allowed to travel unless they are seated in a child safety seat that has met with safety regulations. Children under 12 years are not allowed to sit in front and must be seated at the back safely fastened.

From my reading with regards to seat belts, most countries seem to make it compulsory for drivers and passengers to wear seat belts. Spain, Sweden, Austria, Greece, Ireland and Netherlands, are examples of countries which make it a compulsory ruling to use seat belts.

Now that you know that most countries make it compulsory for the use of seat belts in vehicles, those in Malaysia, especially the authorities should ponder over this problem very seriously and come up quickly with a ruling to make it mandatory for small children and babies to don seat belts as well.

A reader of this blog, a Mr. Patrick, from Florida state wrote in to tell us that down there, police will not hesitate to issue a summon to anyone who ferries a small child without the use of “baby seats” and strollers. That’s how safety conscious people are in the United State of America.