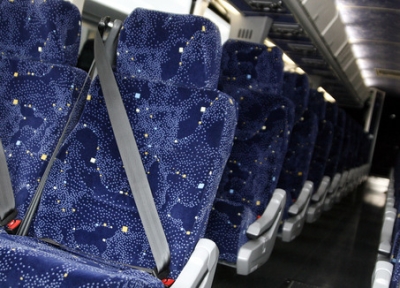 I am a frequent visitor to the Genting Highlands. If you like me fancy regularly going up to the cool resort, you would surely be aware that Genting has a fleet of new marooned coloured express buses.

The above, known as Go Genting express buses, ply from various locations in and around Kuala Lumpur, bringing sightseers both young and old, to the 6,666 meters hill resort. For your information, the Scania express buses, ferry passengers from KL Sentral, Pudu Sentral (formerly known as Pudu Raya), 1 Utama, Kajang as well as the LRT station at Putra Gombak. The above services provide efficient and cool rides to passengers up to the Cable Car station near Gohtong Jaya.

The road up Genting Hinghlands is both winding and hilly. Without a doubt, I must admit, bus drivers of the company are a safe and careful lot of dedicated people. But going up Genting Highlands and descending down it, especially during raining weather, can be extremely dangerous and treacherous indeed! As such, there is just so much drivers can do. And nothing more!

To ensure the safety of passengers at all times, passengers who travel in express buses, especially up and down Genting Highlands, should be belted up. Genting express buses all have seat belts. But sad to say, not many choose to use this important piece of cloth or rather the Seat Belt.

Permit me to unveil to you an accident which took place just not too long ago. I was descending down from the First World Bus Terminal. As it was already puasa or breaking fast time, the Malay driver that evening, was quite in a rush. He was driving unusually fast that particular day. I observed the driver was taking corners rather fast and furious as well.

Before proceeding on with this story, permit me to provide you with a little wee bit of advice regarding travelling in express buses, especially those going up hill and more importantly, those going downhill. Passengers should ideally sit in the middle section of the bus. In such positions or locations you can hold on to the seat that is infront of you. You will therefore not be subjected to the swaying and swinging movements, as the bus descends downhill. Get the advice?

As luck would have it, the express bus that I was travelling in down from the First World Hotel, I was sitting at the first seat near the entrance door.

As the bus shoved off, my co-passenger, who was on my left, began to install his seat belt. He then advised me to simultaneously install my safety belt too. His contention was, the driver would most probably be executing acute turns and corners as he manouveres downhill. And how right he was.

Luckily enough, I took my co-passenger’s advice. If not, I think I would most probably have been thrown out of my seat. And probably suffered injuries if thrown onto the floor of the bus. Can you imagine someone my age suffering from such injuries? It is hoped that from henceforth, passengers who embark on express buses should heed my advice. And do wear your seat belts that are provided. You actually have nothing to lose at all.

Talking about seat belts and express buses, are you aware that about a year ago, that is in 2011, the Malay Mail newspaper, reported that the Malaysian government will be implementing a law whereby it would make it compulsory for seat belts to be affixed to all express buses, beginning the year 2015!

This move is in line with the United Nations Economic Commission For Europe (UNECE) World Forum For Harmonization Of Motor Regulations (WP 29). For the transport sector, as such, all express buses will be made compulsory to have passenger seat belts installed in them when 2015 arrives.

The Malaysia Public Transport Directory, a body which is much concerned with bus expresses and its safety in this country, is of the opinion that the UN body’s suggestion above is indeed a very encouraging step. It should be implemented as early as possible, they insisted.

The Malaysian Public Transport Directory has put forward a suggestion. It says that the implementation of the different regulations should be done together to save operators costs. Operators can have time to purchase new vehicles that fulfill regulations.
R66 and R80 are actually related to R66, which can ensure that even when a bus is involved in a roll over, the structure be still be maintained and protect passengers. To make sure that this can be achieved, the seat structure has to be integrated with R66 and R80 standards.

The above article is a result of a research which I made on the use of seat belts for express buses in the year 2015. It is hoped that this enlightening news will be of use to you. It is hoped that all readers of this article would be anticipating the arrival of 2015 and the seat belt implementation.