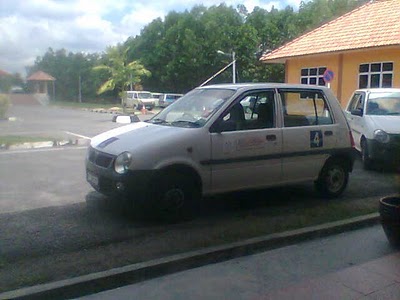 Driving school, which wanted to test their candidates, had to send their students for test to the above mentioned places. For driving schools around Petaling Jaya, this was not a problem.

However, driving schools located further away, like Kuala Selangor and Kuala Langat are but 100km away. I personally know of driving instructors and their students who have to “house up” or stay in hotels in Klang earlier the day before.

One has to remember, “tests” begin at 8:30 in the morning. All in all, it was much inconvenience caused. Not forgetting too, the costs were high.

Vehicles (cars and motorcycles) to be used for the day’s test are all the responsibility of the institutes itself.

All parts of the practical tests, for Class D (cars) for example which comprises Part I (Slope), Part II (Side Parking and 3 Point Turn) and the Part III or “Road Test” are conducted at the institutes itself.

Test for Class E license (lorries) and Class B2 and B Full (motorcycles) likewise are conducted all at the institutes nowadays.

Motorcycles tests for B2 (motorcycles below 250cc) and B Full (above 501 cc) are all conducted at the institutes. The institutes have “circuits” which are built according to J.P.J. specifications.

Some newer institutes built lately, even do not use “parking sticks” anymore. Whether they have reverted to using “sensor”, I am unsure. There is an institute situated in Meru, Klang which is built according to the latest specification.

It is understood in the very near future, all existing institutes will undergo a revamp to the latest techniques and facilities shortly.

It would take a lot of money no doubt but in the long run, it is good for the advancement of the Institutes themselves.

Explanations have been made to the parking facilities like slope and side parking and motorcycle circuits for test at institutes.

However, no explanation has yet surfaced with regards to the “test route” used for car and lorry candidates.

For readers consumption, the above routes incorporates a 15 – 20 minutes drive out into the traffic congested area surrounding the Institutes. The J.P.J. planning department has prior to approving the institute’s request for running a driving institutes, has drawn up 1 or 2, even 3 “test routes” for potential candidates.

These routes are some 15 kilometers in length, going through “roundabouts”, passing “schools” and “clinics”, “pasar tani”, “U-turns”, “traffic lights” and many other potential obstacles to test a candidate’s ability to drive well.

Any candidate who can get through successfully such as “difficult” route during the “jalan raya” test, should feel assured that he or she is competent enough to drive on our roads when they eventually receive their licenses.

Of course, there will be some who fail either in their “parking” or “road test”. They will then have to re-sit the parts that they have not been successful. That goes for motorcycles candidates too. Do not feel discouraged. Your should try again!