After completing my studies, I finally left Penang Island in 1982. That was nearly 29 years ago. Before leaving the above island, I remember selling off my Suzuki 150 c.c. motorbike to a friend. It was sold for RM150.

Another thing I recall was the Penang Bridge was then being constructed. I still remember very vividly, how I used to sit on a slope, in front of the USM chancellor’s office, every evening looking across the sea towards the mainland. The view was just enchanting.

Back in October 2011, my family and I had to come back to Penang Island again. Our entourage consisted of my wife, my daughter and my son. It also included our niece, San Fa from Hong Kong and her 2 children both boys. 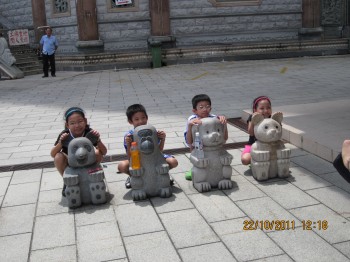 My granddaughters and my niece’s sons

Not forgetting also my sister-in-law and her husband. The total number of people that went to Penang was nearly 10 people. As Penang from Selangor was approximately 560 – 600 kilometers in distance, it was decided that the family rent a 12 seater van for our 3 days visit to the island this time around.

In my earlier postings in this blog, I remember telling readers that my wife, does visit other countries for her holidays. To date, she has visited China, Europe, Turkey, and Korea, just to name a few. We therefore got hold of the taxi driver who used to fetch her and her friends to and from Klang to the KLIA in Putrajaya.

Incidentally, the van driver was an experienced driver about 50 years old. Besides driving us all the way to Penang, the driver Mr Phua B.T. was also entrusted to take us sight-seeing in Penang.

Among the places we intended to visit were the Esplanade, the Siamese Sleeping Buddha Temple, and the Burmese Temple, both of which were located in Burmah Road. And of course, there was also the famous Kek Lok Si Temple in Air Itam.

Readers might want to know how much it costs the entire entourage for our 3 days visit to Penang. Well, we or rather Mr Phua used a Mercedes 1200 van with registration number MBK 2511. The above van was not only comfortable, the air-cond was cool and travelling all the way to Penang and back was indeed delightful.

In short, there weren’t any complaints at all. But the most important of all was this driving instructor of 45 years experience who was sitting in the front seat next to the driver Mr Phua, was very impressed and felt very safe with Mr Phua’s mode and manner of driving.

Mr Phua, in my humble opinion was indeed a good and safe driver. I feel one cannot get a better driver as compared to Mr Phua. We were in fact, in safe hands, so to say.

Later I will proceed to describe to you why he considers Mr Phua to be a good, if not an excellent driver. I have been coaching or teaching people how to drive for so many years now should be able to assess another driver’s capability to handle a vehicle. I’m sure you will agree.

Before continuing any further, how much did we pay for the 3 day endeavour to Penang Island? In reality, we had to pay RM1200. Some may contend it maybe a little expensive. Besides the above, we had to provide a place to lodge for the driver, Mr Phua.

Wherever possible our driver was to join us for “makan” or during “meal time”. A good working rapport between the driver and members of our entourage was very important if our trip was to be made interesting, enjoyable and less tiring.

Me and my wife visiting the Siamese Sleeping Buddha, Penang

Besides our van travelling to Penang for a period of 3 days, my eldest daughter, Swan Nee and her hubby, Kin and their 2 children Joey and Raey, were also travelling to Penang by themselves in their Toyota Prius. They left their Kota Kemuning home, one hour later than us, at 10.30am and they reached Penang at around 6.45pm.

Before leaving for Penang, the group decided to take breakfast at Rantau Panjang, 4 ½ miles from Klang. The group had and assorted menu of wan tan mee, kueh teow soup, chee cheong fun, and toasted bread. For drinks, some took barley water, kopi oh, soya bean, ice tea and so forth.

We in fact had our breakfast at a restaurant called “30-30”. Food and drinks in the above place was rather cheap on the whole. And about 10.00 am or so, the group finally left Klang, heading towards the north, for Penang!

Let me tell readers why our driver, Mr Phua B. T. was considered a safe and good driver. Relating to readers the qualities of a good driver is important. Readers might wish to imitate the antics of this driver and drive safely when they have to drive long distances to Penang or Singapore, which is more than 500 – 600 kilometers away.

Among the good habits this instructor observed about our van driver, Mr Phua were the following:-

i) He does not exceed more than 110 km/h all the way to Penang. This is well within the limits of expressway driving in Malaysia.

ii) When Mr Phua meets heavy traffic on his way to the north, he is sure to slow down as he realizes it is dangerous.

iii) In his attempts to overtake the vehicles in front, Mr Phua is sure to make certain that there are no vehicles approaching behind him.

iv) Mr Phua, as a driver does not make sudden swerves in order to overtake vehicles in front of him. This is indeed a good practice which other drivers travelling long distances should try to emulate. All in all for the entire 500 – 600 kilometers journey to the north, we were lucky to be in the hands of a very good driver indeed.

v) One further good practice which was followed by our driver Mr Phua was after travelling every 150 kilometers or so, the above driver was sure to make stops at R and R (Rest and Recreation) spots which dotted the entire north to south highway. This provided the opportunity for passengers, which included both children and elderly folks, a chance to ease themselves.

Mr Phua himself will get the opportunity to take a short much needed rest and also stretch his legs as well. Occasionally, the van driver takes a puff. I’m sure this makes him a better and alert driver as well.

For readers information, we stopped at Kuala Kangsar, Perak’s royal town, at Selama and also at Bukit Mertajam which was opposite Penang Island.

For lunch, Mr Phua took us to a Chinese restaurant which located opposite Penang Island. We order six dishes; we had fried squids or sotong, lemon chicken, two or three types of fried vegetables and taufu or fried beancurd as well. With assorted drinks all round, the bill came only to RM108.

If we were to have the same type of dishes in our hometown in Klang, I would not be surprised if the entire bill comes to well over RM200. So readers, how about it? Stop at Bukit Mertajam, which is directly opposite Penang Island and enjoy your lunch there.

After a 4 ½ hour journey, our van finally pulled into the compounds of Berjaya Hotel, which is located in Burmah Road, Penang. Our entire group occupied a total of 5 rooms at the 25th and 26th floor of the 29 storey hotel. In less than half an hour, we had already checked in.

Since this post is getting rather long, I will continue to share my experience returning to Penang Island after a span of 3 decades in my next article.