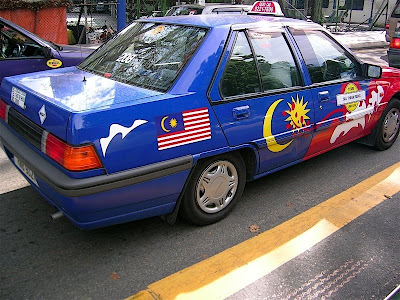 In Malaysia, school buses, factory buses, taxis as well as express buses come under the control of the Commercial Vehicle Licensing Board (CVLB).

School buses are painted canary yellow. Factory buses, for your information, are painted blue. Taxis in Malaysia, are however painted white and red in colour. The above commercial vehicles are all painted in their distinctive colours for easy recognition by the public and also the authorities which are the police and the Road Transport Department.

A friend of mine, Johari who hails from Gombak is an illegal taxi driver. Johari operates his taxi service from the Gombak LRT station to the Genting casino. Although Johari has been a taxi driver for many years, unfortunately, his attempts to secure a registered taxi permit from the Road Transport authorities has been in vain.

I also know a few taxi friends and colleagues as well. One is Ah Suei, now 70, and the other is Wong who is currently a driving instructor. Talking about taxi drivers, Singapore is renowned to have one of the best taxi services. England, is also said to possess excellent taxi services.

My brother-in-law, Mr. Ooi, once went to England for a short holiday. He was reported to have left an old camera in the taxi in London. A few weeks after he returned to Malaysia, Mr. Ooi received a letter from the taxi agency from London, requesting him to claim the camera from the taxi company.

Unfortunately, according to tourists who visit Malaysia, Malaysian taxis have been described as smelling like toilets. Malaysian taxi drivers are said to be discourteous and the service they provide rank as one of the worst in the world.’

To become a legal taxi driver in Malaysia is actually not easy. The authorities which issues the taxi permits, the CVLB in Putrajaya, has spelt out some strict and stringent requirements.

In today’s article, I shall endeavor to touch upon 6 rules and regulations which the J.P.J. look for.

1) A driving license and many good years of experience in driving.

A person intending to apply for a taxi permit should ideally possess good and clean driving records. In short, the capability to be able to drive competently would be a boon. It is my understanding that many ex-soldiers or army personnel, eventually land up as taxi drivers as they are said to be of good and impeccable character as well as disciplined.

Not everyone can become a taxi driver in Malaysia. A person who wishes to become one must first of all attain the PSV license. To get a PSV license, one has to go through a rather tedious process. Amongst the requirements are:
i) Attend a 1 ½ day course organized by driving institutes and Road Transport officials.

iii) Getting a PSV license to enable him to drive a taxi.

3) Must be in possession of good character and not black listed with the police.

To be accepted as a taxi driver in Malaysia, the rules require a person to be of sound character and to be trustworthy person as well. As such, people who were once ex-gangsters and bad hats will obviously not be permitted by the authorities to apply to become taxi drivers.

4) Must have the ability to own a vehicle.

A person must also have the ability to possess, ideally a new vehicle which can cost quite a large sum of money. A normal vehicle of say, a 1300 cc can easily cost anything from RM40,000 to RM50,000. In short, to own a taxi, you should have the financial capacity too.

5) Knowledge of local and popular place in towns and cities.

To be a good taxi driver, one has to know places, as they say. One for example, has to know popular destination such as KLCC, the Petronas Twin Tower, Bukit Jalil Stadium, PWTC and ideally all the roads which tourists and local folks might normally wish to go.

In fact, the authorities issuing permits subject a potential taxi driver to such geographical knowledge during the practical test.

6) Able to provide a fair calculation of distances travelled and usage of meters.

Taxis operators must be able to give an accurate calculation of the distance passengers traveled. Most taxis nowadays use meters. As such, the price of distance traveled should not be much of a problem.

A good taxi driver should be able to give passenger a correct calculation of taxi fares that are used after 12:00 pm. Such ability by taxis driver is very important as passengers will not feel short changed by unscrupulous taxis operators. By being fair and courteous, it will go a long way in redeeming the image of taxi drivers in this country.

Permits of taxis can be issued for:
i) Town and cities service.

ii) To outstations like airports such as KLIA and Penang airport.

iii) To provide services at specific places like Genting Highlands for example.

Tourists and local people alike seem to have a poor impression of services provided by taxi drivers today. But to be fair, there exits a saying which reiterates, “there are always 2 sides to a coin”. Without a doubt, there will always be bad taxi drivers and not forget too that there are also taxi drivers who are good as well.

To end this article, permit me to relate to you a touching episode of one Chinese taxi driver in Cyberjaya My youngest daughter was once waiting for a bus to arrive near her campus in Multimedia University at 7:30 pm. It was getting dark as night was approaching.

At the bus stop where my daughter was waiting, was a group of rowdy ruffians. Her safety was in fact threatened. While she was waiting for her bus to arrive, surprisingly a taxi stopped beside her. Sensing the apparent danger that my daughter was experiencing at that time, the taxi inquired why my daughter had not opted to hail a taxi instead.

On hearing that my daughter was at that time low on funds and therefore unable to use the services of a public taxi, the driver finally requested her to enter his taxi and ferried her to her destination to Kuala Lumpur free of charge.

This story has touched my heart tremendously. I do not know who the Chinese taxi driver is. All I wish to reiterate is, there will always be bad taxi drivers around. But at the same time, do not forget that there will also be taxi drivers who are caring and humane as well.

I am very sure that in your encounter with taxi drivers, you will one day surely come across taxi drivers who are not only courteous, fair and provide you the good services which you require. To all taxi drivers, do not be disheartened with the bad publicity your profession has garnered thus far. Persevere and I am certain you will prevail one day!