Statistics on road accidents in Malaysia indicate 62% of those killed are motorcyclists and pillion riders. Driving in cars is therefore much safer than riding motorcycles. Those who drive cars are protected by the external body of the vehicles itself. Seat belts also provide protection to drivers and passengers as well.

More expensive cars have protective bars running along the entire body of the vehicle, especially along doors. Modern day cars are equipped with air bags too. Expensive models of cars are said to be supplied with as many as 7 air bags.

Without a doubt, to drive a car is safer. If you should opt to ride a motorcycle instead, you will be subjected to various risks and dangers. One should therefore ride carefully. 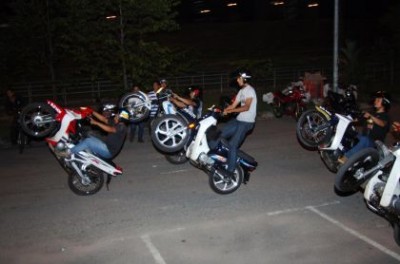 Such being so, motorcyclists are reminded that the only protection they can get from riding this dangerous machine, is from the helmet itself. If you have to use a motorcycle, invest in a good, reliable motorcycle helmet. I would like to suggest that you get yourself a Bell, full faced helmet, which is said to cost well over RM500 each. Anyway, do remember that, whichever variety of good and reliable helmet you choose to get yourself, it will be useless if you do not tie up your straps properly.

May be you might not be aware, a candidate, appearing for a practical test conducted by Road Transport Department’s officials, is consisted to have Failed, should he be incapable of tying up his helmet properly. Wearing a protective helmet, and not tying its straps in the correct manner, tantamount to not wearing a helmet at all.

The high rate of accidents involving motorcyclists, about 62%, to be exact, has alarmed the Malaysian Cabinet. The Cabinet, is said to view this matter rather seriously. As such, the Road Transport Department (RTD) has been directed to crackdown immediately on the antics of motorcyclists.

With the above various amendments to the Road Transport Act 1987 has been made. The amendments now gives the RTD the power to inspect vehicles on ALL roads, irregardless of whether it is a private road, parking lots and including roads in plantations, housing estates or villages. In short, the JPJ or RTD now has the right and authority to inspect all vehicles Everywhere. It is now like Celcom! In Hokkien, Celcom signifies heaven and earth, meaning in all places.

In order to safeguard the safety of motorcyclists in the country, the Minister of Transport, Malaysia, has directed all state JPJ directors, to make sure that motorcyclists from now on adhere to rules and regulations set out by the department.

The public might not be aware, but the JPJ does carry out community programmes. Many rural folks, like the orang asli for example, do not have driving license, even after riding motorcycles for years. The JPJ intends to assist the folks mentioned above to procure licenses. This would enable them to be eligible for insurance coverage as well.

What seems to be the problem with motorcyclists? Why are they involved in such a high rate of accidents as compared to other road users?

The authorities should infact study the reasons why so many accidents involve motorcyclists. They should come up with steps to overcome this serious problem. Below, I would like to provide a few steps to help solve this difficult problem faced by the authorities.
The steps include:

i. Raising the age to obtain a riding license.

Although this step has been advocated by many quarters, unfortunately it looks as if it has not been taken heed of. The present age to obtain a riding license (B2 class), is 16. This present age should ideally be raised to 18 at least. At 16, some, or rather most youngsters are still immature.

They might not know the dangers involved in motorcycle riding. At an older age, it is hoped some motorcyclists might have become more mature and will therefore ride a motor in a more responsible or safer manner. It therefore augurs well for the age to secure a motorcycle riding license in this country to be raised to 18 at least.

Those who lack discipline cannot be expected to follow rules and regulations. They cannot adhere to traffic lights. They commit things they are not supposed to do. They may be underage or do not possess a riding license.

And finally, they know that the purpose of a motorcycle is to provide them convenience, to bring them from one place to another with ease, but because they are undisciplined, they begin to speed up to 140 km/h or 150 km/h, thus breaking the rules and endangering themselves.

Who is to be blamed for such irresponsible behavior? The motorists themselves, I would say. The safety of motorcycle riders are in their own hands themselves. No one can save them or prevent them from getting into accidents but they themselves.

iii. Many motorcyclists like to be involved in illegal races or merempit motor.

Merempit motor goes against Section 81 of the Akta Pengangkutan Jalan 1987. Under the above section of the act, illegal racing is deemed as serious offences. The fines are high, but obviously they are not high enough to deter people from partaking in illegal races. The government should consider seriously how to solve this problem.

Many motorcyclists have since lost their lives in such races and this problem has to be nipped in the bud as soon as possible.

iv. Young village or kampung folks and youngsters from housing estates as young as 10 or 12 can be seen nowadays riding motorcycles without the wearing of safety helmets. Parents, it looks at if, are unable to prevent their kids from using motorcycles. Parents, as a matter of fact are incapable to control their children especially where riding motorcycles are concerned. The problem appears very serious. Something concrete has to be done.

It is hoped that the forthcoming onslaught on or crackdown on Malaysian motorcyclists will go a long way to cut down the rate of accidents involving motorcyclists in this country. 62% is enough!

To end this short article on the dangers of riding motorcycles, I would like to relate 2 cases of real life stories that have remained in his memory all these years.

One of the stories pertains to the son of a neighbor of mine, Ah Choy, a former welder. The above person had a son, 17 years old, who was then working in Singapore. On his coming back home one afternoon from the south, the boy received a call from a few of his friends, who invited him for an outing at the Esplanade at Perlabuhan Klang.

On his way there, Ah Choy’s son was knocked down along Telok Gadong Road, near the La Salle School, Klang. The above accident took place some years ago. But unfortunately, even up till today, Mr. and Mrs. Ah Choy still bear sad memories of this unfortunate incident.

In another incident, a former colleague of mine, a Miss Chong, who was then working in a large secondary Chinese School in Eng Ann Housing Estate in Klang, was traumatised by the sad case of her elder brother.

Chong’s elder brother was riding a 500 c.c. superbike down from Singapore. Chong’s brother was not to reach Klang, his hometown. At Gemas, Johore, the superbiker met a nasty accident with a large Petronas oil tanker and lost his life. He was then less than 40 years old, when the accident happened.

Motorcycles are good inventions. But they should not be misused by us. Use it correctly, and I’m sure it’ll bring us a lot of good. Don’t forget to wear your safety helmet. Wear knee high leather boots. And goggles too. And leather gloves to protect your fingers. Leather jackets and thick jeans should ideally be your attire when riding a motorcycle! In short, protect yourself!