Japan is well known for its “cherry blossoms”. But do you know the Chinese automobile maker, Cherry Auto group which is incidentally based at Wu Hu, China in the province of An Hui, has been reported to have exported more than 500,000 vehicles to more than 80 countries and regions all across the world.

It is without a doubt that Cherry cars may not be as popular as vehicles from other Asian rivals such as Korea and Japan and when compared to Toyota, Kia, Nissan, Honda and Suzuki, it stands nowhere but near them, at the rate at which Cherry cars are currently being produced, it won’t be too long before the above cars become a famous household name very soon. 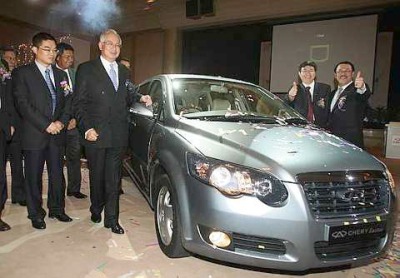 Cherry Automobile Industry is reported to have some 12 overseas manufacturing bases in places such as Ukraine, Egypt, Russia, Iran, Uruguay and even here, in Malaysia. Regarding Cherry’s Malaysian market, according to Mr. Zhou Bi Ren, there are presently some 10,000 units of Cherry cars in Malaysia today.

Cherry car sales in Malaysia does not appear to be lucrative. The above is in a way due to the N.A.P. or National Automotive Policy followed by our country, Malaysia. The above policy stipulates very explicitly that it only allows foreign automakers which produce cars which have a engine capacity of more than 1.8 litres to be imported into Malaysia. Cars below this capacity range of which Cherry cars are categorized, all some difficulties being imported into Malaysia. The above policy is intended to protect local automobile industries.

Rather recently, a reader to this blog wrote in to lament that unlike other countries such as Europe, America, Australia and England, where electric vehicles have been introduced into their domestic market, the introduction of electric vehicles or cars into our country, Malaysia has not been very encouraging, as a matter of fact, it has been rather slow and discouraging, he says.

It has to be explained to readers that the attempt to introduce EV or electric vehicles into any country, especially Malaysia, is bound to meet with complicated and difficult problems. The above problems must first of all be overcome before the electric cars can be introduced successfully.

Mr. Zhou Bi Ren, Cherry Automoblie Limited’s spokesperson informed the public his company has developed several EV models such as M1-EV, X1-EV, Cherry’s A51 SG, A5 BSG, S11EV and S18 EV. The above vehicles are all ready to be launched the moment infrastructures such as charging stations or outlets are in place.

Readers should realize that for electric vehicles to be brought in to this country, we have to remember that a few pertinent things have first to be met. Amongst the things that needs to be first attended to are:

i. Charging Outlets and stations.

One should take into account where the electric cars can be recharged. Even if one has a place to recharge the electric vehicles’ battery power system, one cannot possibly be expected to wait a minimum of 5 hours for the charging process to take place.

ii. The problem of battery weight of electric cars.

Cherry Automobile engineers are currently attempting to overcome this problem in in trying to come up with vehicles which has a capacity to travel in excess of 200 km. it has been suggested that car batteries for electric cars be replaced after use. But Cherry establishment reiterated that to do this involves a lot of money. As yet, no company has yet to agree to invest in setting up such a facility.

iii. The appreciation of the yuan against the dollar.

The yuan being a strong currency today appreciates strongly against the dollar. As such, the Cherry Automobile Company thus faces tremendous uphill problems.

The above also represents some of the major problems faced by the Cherry Automobile establishment in its attempt to introduce its cars worldwide.

China has been slowly emerging as a major producer of automobiles besides Japan and Korea. Annual total sales volume of Chinese automobiles have increased tremendously from 459,000 in 2010 to some 682,000 in 2011. This represents an increase of some 36.3%. This makes the Cherry manufacturer the 6th highest ranking automotive producer in China today, overtaking the United States as the world’s largest auto market which boasts of an 18 million unit sale.

With Japan currently reeling under its recent earthquake and tsunami disasters, which will obviously take quite some years to recover, Cherry car producers is faced with a bright future for its automobile industry, especially where electric cars are concerned. Eagerly, motorists, especially in Malaysia, awaits Cherry’s arrival on our shores with bated breath!