They say “no news is good news”. For more than 3 to 4 months now, the national newspapers in Malaysia, The New Straits Times, The Star, the Berita Harian, Nanyang Siang Pau and others, had not reported about any bus crashes. And then, the public were shocked when two tragic bus crashes were reported, one after the other.

In Behrang, Perak, 4 people lost their lives when the express bus they were travelling in, skidded and keeled over along the North – South Expressway on Friday night, 11.11.11. Students from Air Merah Secondary School, Khairul Anwar Azhan and Maysarra Zaidi both 15, and their teacher Siti Hajar Mohamed 33, were in a bus that overturned. The three were attempting to rescue their friends, who were trapped in the bus, when a sand laden trailer ploughed into their bus. The gruesome incident took place at the 382nd kilometer, a 100m from the rest area at about 4.20 a.m. 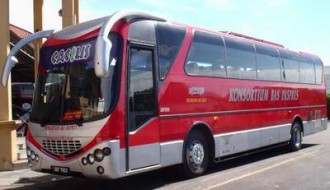 It was reported that the above bus was carrying 36 students and 3 teachers. The driver of the bus lost control of the vehicle when one of its front tyres burst. The bus then overturned. While attempts were being made to get the students and teachers out, a trailer reportedly hit the stationary bus from behind.

A few days prior to this incident at Behrang, 25 people were reportedly injured in a highway crash, in an accident which took place at the KM19 along the Ayer Hitam–Johore Baru stretch, minutes after it had crossed the Kulai toll plaza. A passenger, S. Parvathy 26, who sustained head injuries, said the bus driver was then speeding.

According to Johore Baru (North) deputy O.C.P.D., Supt. Mohd Akhir Ishak, said police were now in the process of questioning the 45 year old bus driver. The accident is being investigated under “reckless driving”, which comes under section 43 of the Road Transport Act 1987.

Hardly one day had passed by, when another express bus, which was then transporting workers from the Hospital Sultanah Aminah near Johore Baru, overturned. The impact of the accident was so bad that the bus split into two. In this accident, it was learnt that the bus driver was also speeding. This had caused him to lose control of the vehicle.

Commenting on the recent spate of accident involving bus expresses, the Land Public Transport Authority (SPAD) has urged passengers to report directly to them if the drivers of buses they are travelling in speed or driver recklessly. SPAD it is said, has a special team stationed in Putrajaya, who will immediately contact bus operators when a report of speeding is made by a passenger.

All that is needed is the bus registration number, what time and where the incident took place. And immediate action will be taken!

Commenting on the two recent bus express accidents, SPAD Chief Operating Officer Encik Azhar Ahmad, gave a stern warning to bus operators to ensure that the safety of passenger is given top priority. Otherwise, he warned they stand to lose their licenses.

In one of the incidents, the driver was reported to have lost control of his vehicle, when his front tyre burst. In the other 2 incidences, passengers complained that the drivers of the bus express, buses were in fact speeding or travelling at dangerous speeds.

As such, high speeds seem to be the main cause of express buses going out of control. To prevent such future incidences from happening, I would like to make a few suggestions. It is uncertain if they will be even be considered at all. Nonetheless, no harm attempting, I believe.

The suggestion I would like to put forward are as follows:-

i) In Turkey, all tour and express bus move only during the daylight hours. They stop after 8.00pm. The authorities there believe, buses travelling at night represent “danger”.

Can the authorities here in Malaysia consider this suggestion seriously? I would like to make a serious suggestion whereby all tour buses should stop travelling by midnight, which means all express buses should reach their destinations on the stroke of midnight.

The Land Public Transport Commission or SPAD, people should look into this recommendation seriously in order to prevent accidents from happening.

ii) As speeding by bus drivers seems to be the main culprit for causing most of the accidents, would it be possible to control the speed of the tour or express buses to a maximum speed of 50 or 60 km/h? As they say speed kills!

Well, what about it? Will the public accept a 10 hour journey from Kuala Lumpur to Penang beginning from 10.00 am and finally reaching Penang Island at 10.00 pm? Bearing in mind that 2 rest stops along the way, each ½ hour stops will have to be made in the interest of passengers and bus drivers.

As they say, travelling by bus may eventually be slower and may take a longer time if my suggestion is to be implemented. But it will definitely be safer. I’m sure there will be less accidents taking place.

Those who cannot accept the fact that going back to Penang will take 10 to 12 hours should then opt for an alternative transport. I will only be putting forward 2 suggestions this time around. It is believed that it would be pointless to give more suggestions if the authorities are disinterested in giving these suggestions its proper accord.

Give the above two suggestions some thoughts first. Implement them and see what the results are. Then, other suggestions can then be put forward. Training for drivers, buses being constructed well and ensuring that bus drivers refraining from usage of drugs and so on, can be attended to at a later stage. As Confucius said, “the journey to a thousand miles begin with the first step”.