My Experience Visiting The Penang Island With My Family

My Experience Visiting The Penang Island With My Family

In my last blog post, I wrote about my family’s trip back to Penang Island after a long period of almost 30 years. I ended my article after my family members checked into the Berjaya Hotel.

After resting for a while and having refreshed ourselves in the hotel, most members of our entourage then decided to proceed to a shopping supermarket which is located next to our hotel to browse around.

The weather that day was rather bad. It was raining quite heavily. This spoilt our programme of having dinner outdoors at the Esplanade. 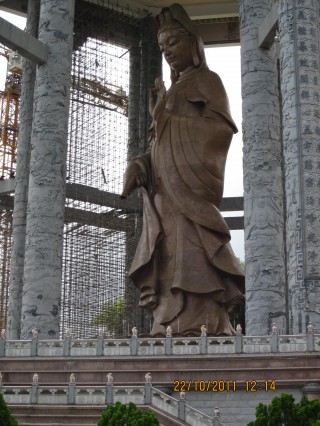 As the weather was poor, the group then decided to have all types of Penang food, especially Thai fare, which was available at the ground floor of the supermarket. I remember having fried prawn fretters, asam laksa and kuih pulut stuffed with bananas.

Later, with many members of our group fancying to opt for Chinese food, we then adjourned to a nearby Chinese outlet for fried koay teow Penang style, fried rice, mee hoon goreng, koay teow soup, and many other varieties of food. With drinks all round, the entire bill for the group came to a total of about RM80 or so.

Being free, with nothing much to do on Saturday 22nd October 2011, the group then went sight seeing. At Burmah Road, the group visited the famous Sleeping Buddha Temple and the Burmese Buddhist Temple. Our next visit was to the Kek Lok Si Temple in Air Itam. Prayers were made and without a doubt lots of photographs were taken.

At the foot of the famous Kek Lok Si Temple, we stopped at a restaurant to have our lunch and refreshments. After lunch, some members of our group went shopping. Others decided to go back to the hotel for our much needed rest. 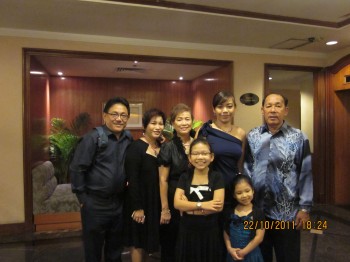 My Family Getting Ready For Dinner At Corner Club, Penang

On Saturday evening, the group was supposed to attend a Chinese dinner which was held at the Corner Club in nearby Pulau Tikus. The above dinner was given by my son’s in laws in our honour. The dinner ended at approximately 10pm.

On Sunday, the 23rd of October 2011, we were to leave Penang for home. We finally left the island at around 2pm. The journey back home seemed to be more tiring. At Tapah, our van stopped for a rest. We bought a big sour sop for RM16 and a few other fruits as well. After 4 hours, we finally reached Klang at 6.45pm.

What did I learn from the trip to Penang this time around?

The journey to and back from Penang was a smooth ride. The weather was cool and not very hot. Penang Island after all these years, has undergone much development. One thing that was observed was that the city these days appear much cleaner. But the roads there were as usual traffic congested.

The 2nd Penang Bridge is currently being constructed. With it, without a doubt, the amount of the traffic in Penang will become even dire. How will the authorities deal with this problem, is left to be seen.