In my last blog post, I wrote about one of my driving student who was working as a night club bouncer in Johore Bahru back in the 1970s. I told the story of how my student drove so fast our highway police could not catch up with him. Luckily he was not charged because back then, our Malaysian police do not have the necessary tool to measure the excessive speed he was driving.

The situation today is very much different. Malaysian police today are using the latest equipment to nab motorists who speed. They have the help of H.D. or high definition cameras! 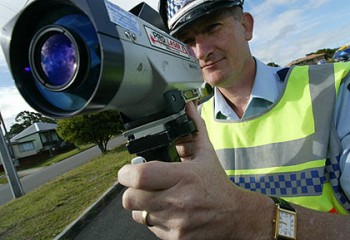 Speed cameras called LT120-20 Tru which are said to be capable of capturing very sharp images are being used. If can even show clearly registration numbers of speeding vehicles.

Malaysian motorists who are caught speeding along our expressway, have all along challenged the police and J.P.J. summons issued. Even in the courts, there is not enough conclusive evidence to prove that a motorist has been speeding. All these will end soon.

Tens of thousands of the 285,000 motorists found speeding within the last four months of 2011, have been caught by the newly acquired 5 H.D. cameras and other 36 laser speed detectors.

Permit me to unfold to you some of the TruCam specifications and you will know what I mean. Then, decide for yourself whether you can escape from its clutches or otherwise. The LT120-20 TruCam sophisticated specifications include:-

vi. The image of the offender’s vehicle is cropped out of the original picture, attached to the summons and sent to the vehicle owner.

The LT120-20 TruCam is said to be able to identify vehicle make and its model, license plate number and driver’s plus passenger’s characteristics. All these are good evidences which the courts will need to pin you down for the offence that you have committed.

The U.S. made LT120-20 TruCam, is reputed to cost approximately US6,000 (RM17,000). Summonses captured by the above unit, is normally despatched to the offender within 7 days of the offence being committed along with the captured images.

J.P.J. advised that initially offenders are sent reminders to contact the authorities concerned for an interview with them to verify the authenticity of the summonses. A failure to heed the above advice will result in a RM200 penalty. The final follow up procedure will be hauling the offender to court eventually.

In conclusion, it is believed that some 2,375 motorists are caught speeding in Malaysia everyday. With the LT120-20 TruCam it appears that the days for Malaysian motorists who fancy speeding along our highways and expressways dangerously are indeed numbered.

Your waterloo so to say, has finally arrived. Like Napoleon Bonaparte, who lost to Admiral Lord Nelson in 1815, your “D” day is imminent. Hurrah for the LT120-20 TruCam recorder!

The authorities especially the Police and the J.P.J. should buy more of them! They say the ends justify the means. TruCams may be expensive. But eventually, it will go on to save a lot of lives.