In one of my articles, 5 Good Reasons Why You Should Buy A New Car, I wrote on the subject of the pros and cons of owning a brand new vehicle. Amongst the good things of possessing a new car was that it gives you prestige. Besides that, a new car I said was more reliable.

Furthermore, a brand new vehicle or car would be capable of providing you with better mileage consumption. On the other hand, I also reiterated, a second hand vehicle has its advantages as well. It’s cheaper and therefore requires less finance to purchase. It’s also less prone to be stolen as well. 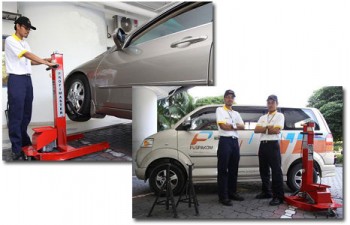 But if you think owning an old car, especially one that’s more than 10 years old, is all a bed of roses, then you are sadly mistaken.

First of all, allow me to inform you one thing, just in case you are unaware brand new vehicles for one thing, requires 1st Party Insurance coverage. It can cause lots of headaches for the owners. Therefore, we should not always envy those who own posh, new vehicles. They in fact face many problems too.

While going up the hill of Genting Highlands, my “haram” or illegal taxi driver friend, Encik Johari, 55, saw a BMW 5 series car overtaking us at great speed. In a twinkling of an eye, the BMW had disappeared up the steep slopes near the Cradle Rock.

Do you know how much the BMW 5 series cost? Johari asked of me. When I replied in the negative, my friend answered, over RM550,000! I immediately suffered a massive headache.

But is it true that owner of old vehicles or 2nd hand ones have not much to worry about as compared to those who own brand new and posh vehicles? Let’s contemplate about it.

Every year, when the time comes for old vehicle owners to renew their mandatory road tax and insurance cover for such vehicles, they in fact face a lot of problems. Ask any of the owners who own vehicles that are over 10 or 15 years old and you’ll know what I mean.

On the 12th of October, 2011, the Star reported in a headline “No Age Limit For Vehicles”. If you are an owner of an old vehicle like me, tarry a while longer. Don’t jump for joy just yet! Read further a little bit more.

At the bottom, it continued, “Inspection for road worthiness a must”, says Deputy Transport Minister, Abdul Rahman Bakri.

Permit me to quote the full text of what the above minister said. Readers can thereafter make your own conclusion. Decide for yourselves whether the authorities are pulling the wool over our eyes or otherwise.

The full text is as follows: –

There shall be no age limit for vehicles. All well and good. But all vehicles must undergo inspection to determine their roadworthiness before being deemed safe for use. However, the government will not impose any age limit on them.

Furthermore, Deputy Transport Minister, Abdul Rahim Bakri went on to tell the Dewan Rakyat that the Transport Ministry has no plan to enforce a vehicle disposal scheme like in Singapore. One good and pertinent point about old vehicles was that the main cause for accidents was speeding. Age of a car was not a contributing factor at all.

But what I would like to comment on what the government just recently announced about the inspection of old vehicles is this “Does the authorities realize why the majority of kampong people or village folks, senior citizens and those of the lower income group opt for old and 2nd hand vehicles?

The answer is plain simple. They just cannot afford new cars. Having owned old rickety bone shaking vehicles, how do the authorities expect the above said group of poor people to upkeep these old vehicles and send them for a compulsory test yearly by the Puspakom authorities’ inspection exercise?

As a driving school instructor for well over 42 years, I have sometimes involved myself in the inspection of cars for friends too. Permit me to quote you the cost of attempting to send a private vehicle for yearly inspections.

Very roughly, the cost of sending your vehicle at Puspakom inspection centres, whether at Sg. Manggis, Banting, Padang Jawa, Klang or anywhere else, are as follows:-

ii. Insurance for 1st Party Insurance coverage currently total RM550 – RM650 for RM14,000 1st party coverage. On top of that, a motorist is forced to buy a compulsory RM10,000 Personal Accident Policy from the company which is willing to cover your old vehicle. This comes to about RM100.

iii. Of course, one can opt to go to the post office to secure your insurance coverage. This writer understands 1st party coverage are cheaper there. My elder brother, B.H. Yap tells me he recently obtained his old car’s insurance / road tax at RM100 less as compared to insurance companies privately owned.

Old cars being sent for inspection must ideally be in fairly condition. As such things, as I list down below should be attended to:

b) A vehicle’s brakes system will have to be serviced prior to its being checked by Puspakom authorities and it costs RM80 – RM100.

d) Wipers, horns, brake lights, indicators, all these will have to be in good, working order. The cost for replacing these can easily reach a sum of RM40 – RM50.

e) An old vehicle’s ball joints, suspension system, and undercarriage, wheel balancing and alignment procedures all have to be checked carefully if it is expected to pass Puspakom’s stringent 5 point examination, cost for the above repair mentioned, it is believed will come to approximately RM200 – RM250.

f) The inspection fee charged for inspection by Puspakom is RM50 per test. Subsequent tests are normally charged RM25.

All in all, an old vehicle or 2nd hand vehicle, which is more than 10 years of age, will need anything from RM1,000 – RM2,000 if it is expected to pass the 5 point inspection test conducted by Puspakom. Only then will an owner obtain the B5 certificate which will then enable him to secure his road tax disc from the Road Transport Department.

It is indeed going to be a big hassle for owners of old vehicles if they are to be forced to send their vehicles for inspection every year. Think about it carefully.

Won’t it be a better idea just to write off the old junk you are now possessing and buy another newer car rather than sending it for inspection at Puspakom! The authorities should consider carefully if what they intend to do is something viable or otherwise.

Anyway, even though my suggestion is good, it would be rather an impossible task to implement. The public will without a doubt make a hue and cry over it if indeed it is carried out.