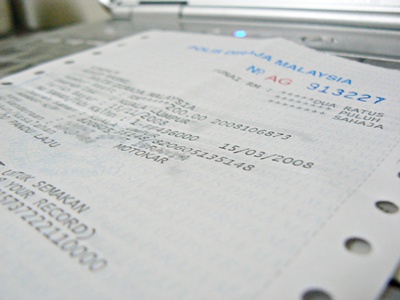 These unsettled summons were said to be issued by the R.T.D., the police and the local council departments for various offenses.

Summons, as we all know is intended to educate drivers. It is hoped that when such summons are issued, drivers will no longer go on to commit the same driving offenses again.

The R.T.D. unsettled issue of RM16.9 million has now become a problem to the government. Inability to collect such a big amount of deficit has now led the government to come up with an incentive.

The cabinet has approved a new scheme. Recently, it has been announced by the Director-General of the R.T.D., Datuk Solar bin Mat Hassan, that motorists from henceforth who receive traffic summons from the R.T.D., the police and local council enforcement officers will now receive the opportunity to settle such summons will get to pay lower fines should they choose to pay them earlier.

For readers information, summons which are currently issued to a driver or motorist have to be settled within a span of 30 days or 1 month’s time. After the expiry of such summons, then what happens? Legal action can then be instituted against you. The reality is, it is a hassle for the authorities to proceed such action against drivers.

The various departments mentioned above can institute legal action against you. They can in fact:

i) Haul you to court.

ii) Stop you at police and R.T.D. road blocks.

iii) Blacklist you in their computer records.

iv) Issue a warrant of arrest against you.

All the above steps take time. As the saying goes, “it is easier said than done”. Saying one thing is one, getting it done is another.

However, under a new scheme of which will be implemented soon, the Director-General of the R.T.D., Datuk Solat has been quoted to have announced, instead of giving blanket discount as incentives, like they do now for paying up outstanding summons, the enforcement authorities or agencies will now collect lower fines for them if they pay within a specified time allowed.

Permit me to explain to you how this system works. Take for instance, a motorist has been issued a traffic summons for RM70. Assuming a person has been caught driving without a valid driving license. Under the Road Transport Act 1987, this contravenes Section 26 (2). The Courts may suggest a fine of RM70.

If motorists should fail to settle the above violation within 2 weeks, then the amount summoned will be raised to RM100 if it is settled a months time. Therefore, the more one delays paying up his fine, the more one has to pay for his fine. Currently, the maximum fine is RM300.

The new payment scheme would be implemented once the Cabinet gave its nod to the proposed changes. Meanwhile, the R.T.D. is now working out the mechanics and the quantum of the scheme with the police and the other local councils.

Earlier it was reported as from 17th May 2010, police would no longer give discount to traffic offenders to pay their summonses. Motorists who are summoned are advised by the Director-General to pay up their dues as soon as possible to avoid paying higher penalties in the near future.

However, motorists should not construe the proposed changes as a means for the government to collect revenue. Summons are explained earlier issued to those who break the law.

Pertaining to another important matter, the Director-General, Datuk Solat will meet their Thai counterparts in Jitra, Kedah on Tuesday to trash out several outstanding issues which entails the entry of Thai registered vehicles coming into our country.

Datuk Solat reiterated, the meeting would focus on permits required by these vehicles being allowed in via the country’s 8 entry points which are located along the border.

Datuk Solat was also reported to have said that the department would also take steps to stop graft taking amongst its rank thereby enhancing the integrity of its officers by signing a Memorandum of Understanding (M.O.U) with the Malaysia Anti Corruption Commission.

The M.O.U. above was set up to realize the objectives of the 2004 National Integrity Plan. Datuk Solar further said that his department was committed in its fight against corruption. To enhance integrity, programmes intended to implement this were left to 10 integrity officers who will incalculate integrity amongst their colleagues.