10 Ways To Get Yourself In Trouble Driving In Malaysia 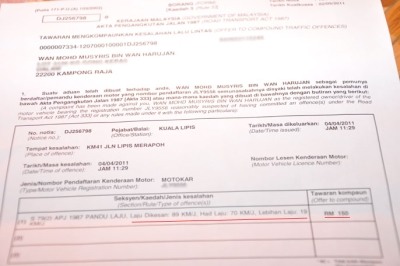 1) Driving Without A Driving License.

You own a driving license but you forgot to bring it with you.

You are stopped by a traffic police a mile down the road.

The police man, while checking your particulars discover that you have no license with you.

Have you committed an offense?

Section 26 (2) of the Road Transport Act 1987 clearly reiterates, “a person should have a valid driving license”, if he or she wishes to drive.

2) Ignorance is not bliss.

Being a new driver, say a “P” driver, you are unfamiliar with the area and you inadvertently entered a “no entry” road.

You are stopped by a traffic cop.

You begin pleading with the officer.

Your attempts to convince the officer of your ignorance failed.

Can the officer summon you?

Unless the cop is willing to excuse you, you are in for trouble.

The law is, “ignorance is no excuse”.

3) Driving with no number plate at the rear.

Does it represent an offense should you drive with no number plate at the rear?

Assuming your car number plate is about to drop off.

You then place it in your booth.

Can you drive your car into town?

Such action by drivers, tantamount to an offense.

Unless the good officer is in his good mood, you can expect to be slapped with a summons.

So, you are advised to refrain from driving should you be faced with such a predicament.

Call a taxi, it is cheaper than getting fined.

4) Driving without seat belt on.

Many drivers drive off without a seat belt on.

Many traveling a short distance, they then attempt to put their seat belt on.

This is not only wrong, but dangerous as well.

If while you are attempting to wear your seat belt, you are seen by a traffic police, can he summon you?

At the moment the officer saw you and you weren’t wearing a seat belt, prepared to be pulled over and issued a summons.

It’s no use arguing your way out.

So, wear your seat belt first before driving off.

Ensure this good driving is enshrined in you as one of your good habits of driving.

5) Crossing a traffic light when the lights turn yellow.

The above has always remained a contention with many drivers.

Those well versed with the law tend to argue it is right.

Though a driver could possibly claim the above, but remember, you will have to be summoned first and later appear in court to fight you case.

Personally, I think it is going to be a hassle.

If you are unlucky, you may have one of these cars tail you while you are crossing during yellow lights.

A friend of mine got a summons issued by the J.P.J. just recently.

My advice is, slow down when seeing yellow lights.

Avoid getting a summons.

That’s the best advice which can be given to you.

Many drivers are not aware that a car without tail light is an offense.

The tail lights are intended to light up the number plates of a vehicle.

It is an offense of these lights are not working.

So, please check this light from time to time to avoid being booked as an offense.

7) Driving at night with a cabin or interior light on.

Many are not aware, it is an offense to drive vehicle with its cabin light on.

With the cabin light on, it will distort the vision of on-coming drivers.

This could lead to accidents happening.

So, do try not to put on the cabin light while you are driving as this may lead to accidents.

Failing to give way to the authorities is considered an offense.

Although the offense carries with it a RM300 fine, at the end of the day, drivers are taught that they should give priorities and right of way to public service vehicles which are out to save lives during emergencies.

9) Driving with tyres without treads.

To drive with tyres that are bare or without treads is considered as an offense.

A driver who fails to look after his vehicle tyres has violated Section 119 (2) of the Road Transport Act 1987.

Committing this offense will get you a RM150 summons.

10) Driving with license that is suspended or banned.

Can a person drive if his or her license is suspended or banned?

To drive with a suspended or banned license is an offense.

So drivers beware, do not attempt to drive while under suspension or with a driving license that is banned.

Most drivers are unaware that these 10 simple driving offenses are committed by many drivers.

Be wary of it so as to avoid being summoned unnecessarily by the authorities.