This blog not only writes on things regarding “driving instructions” and “vehicles”, but from time to time, touches upon subjects such as crab catching as well.

I have been an avid catcher of the above crustacean, the ketam batu variety for more than 20 years. The period stretching from the late 1960s until 1970s.

Speaking about crabs, they Malays consider it makroh. Some on the other hand, say it is haram to consume it. In the seventies, crabs were being sold for about RM15 – RM17 per kilo.

Flower crabs or ketam pasir as it is known, were going for about RM1.50 or so then. Recently, I chanced to observe the above said crab being offered for sale for about RM25 per kilo at the supermarket.

You may wish to know how much the ketam batu crabs cost today. Well, my sister, Molly, and her husband, Mr. Ooi, contend, they come at a price of RM45 – RM50.

To end today’s introductory story on crabs, a few weeks ago, my family, which includes my wife, my son-in-law, my daughter and her children, were at the Siu Siu Chinese Restaurant on the foothills of the famous Then Hou temple in Taman Seputeh, Kuala Lumpur.

Amongst the dishes that we ordered was a crab dish cooked curried style. The above single crab dish was tagged at a whopping RM108, not inclusive of GST, mind you. 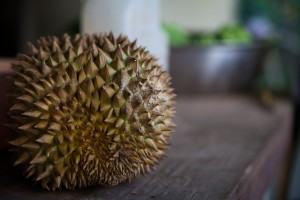 Beside scrabs, it is fair to tell you that I can likely be considered as a self-proclaimed authority on the King of Fruits, which incidentally, is none other than the “durian”.

As this fruit’s season now happens to be in full swing, with the fruits being now sold in every corner of towns in Malaysia, I believe, therefore it won’t be right if no article is written about it.

The durian stories which I know are indeed many and varied. According to my maternal grandmother, Mdm Ee Siew Mooi, the mum to my mother, Ong Geak Tee, the durian is closely associated with the Lord Buddha. I shall not disclose to you they relationship between the above duo so as not to offend lovers of this fruit.

Should you be a Buddhist, go ask your mother or better, your grandmother about it. She, it is believed, will surely know about it.

Anyway, it case you are not aware, let me tell you that my grandmother fancies eating rice with durians. I still remember vividly, my grandfather, Ong Hock Chuan, a petition writer, purchasing one or two durians each day for his beloved wife.

Before continuing further, reading about the King of Fruits, readers might like to inquire why I consider myself an expert regarding durian. Well, you see, in my younger days, my family and I lived in Klang town. We infact lived in Jalan Teluk Pulai, and the surrounding jungle infested areas of Lorong Raja Muda, Simpang Empat, Teluk Gadong and Riverside Road. 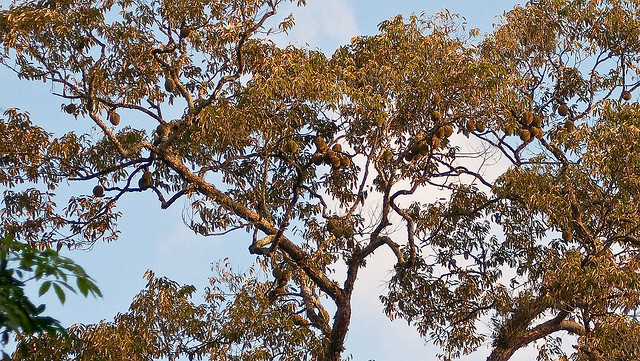 Kampung Martin, which is located in Telok Pulai itself, was in reality my kampung. Alongside durian trees, there were mangosteens, langsat, rambutan trees, duku, guavas and sentul as well.

You name it, all the fruits were there!

I still remember rather clearly then, inspite of the fact that so many years have since gone by, I was then in my teens, around 12 – 16 years old. In Kampung Martin itself, there were roughly 6 – 7 durian trees. There was a huge durian tree which grew to about 100 feet high. Its fruit was, without a doubt, very delicious!

Other durian trees, which were younger and therefore shorter in height, bore equally delicious and fragrant fruits as well. Except for the above durian trees I mentioned, I don’t recall any durian tree growing behind my kampung, that is nearby my alma mater school, ACS Klang.

Talking further about durians, it’s only right that I tell you about a clump of durian trees that grew near Simpang Empat, along Telok Pulai road itself. The above durian orchard, if you may call it, belong to a Mr Ah Poh, who I remember, worked for the TNB.

Durians from those trees, though small, were of good quality and without a doubt, fragrant and of fantastic aroma. The above fruits, were unfortunately for personal consumption only.

Before carrying further regarding the existence of durian trees around the areas of Teluk Pulai, Lorong raja Muda and Jalan Raya West areas, you should rightly be told about a few things I know about durian.

It is said the durian tree cannot be planted alone. Ideally, it should be grown in a cluster. It is believed, durian trees need cross pollination for its fruits to germinate. For this, it is believed, the presence of flying foxes, squirrels and birds play an essential role in ensuring the durian fruit grow successfully.

Secondly, about durian trees, cows are not to be allowed to come near the trees also. It is believed, cow dung and the cow’s urine will cause a major disaster to the durian trees.

A third thing regarding durian trees, which I think one and all should be aware of its durian orchards are affected by carbon monoxide or car exhaust fumes. Believe it or not, there used to be numerous durian trees around Batu Belah area, near the Shapadu Highway. The above trees, near the Arabic School hostel nearby, used to produce quite a lot of durian fruits in my younger days.

Alas, this is not to be the case today. Why?

Has carbon monoxide and exhaust gas been responsible? Your guess I as good as mine. 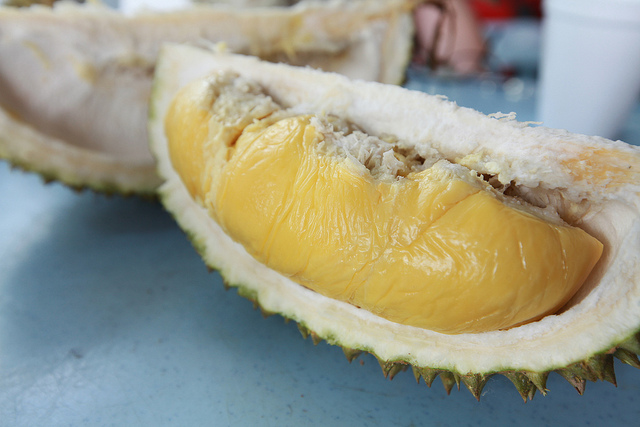 The Durian by Alex Khoo @Flickr.com

Another fact of fallacy about the consumption of durians, advise lovers or connoisseurs of this fruit believe, is never to consume durians with alcoholic drinks. I will refrain from naming the product or alcoholic drink involved fearing repercussions.

Eating durians with certain cokes might bring about disaster as well. People with high blood pressure problems should also be careful in the consumption of durians. Toe the moderate line seems to be the advice that should be adopted.

I feel it is only appropriate that I divulge to you the below episode. A Malay instructor friend of mine, who is form Meru town, told me a story whereby his mother once had a stroke. A facial palsy attack, you might say.

One day, during the durian season a few years ago, the family were reportedly preparing a Malay delicacy dish known as pengat. My friend’s mother, who was unfortunately down with partial paralysis on one side of her body, could not restraint herself to ask her family for some of this delicious and mouth watering durian concoction. 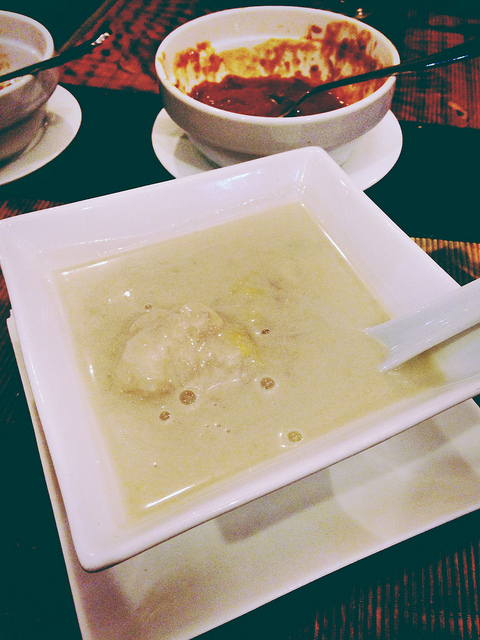 Believe it or not, upon consuming a spoonful of pengat, my friend’s mother lapsed into a total paralysis altogether. Unbelievable maybe, but it is a true story nonetheless.

What I have related to you thus far about durian us only the tip of the iceberg, so to say. The large stock of stories I have on the King of Fruits is only just beginning. Wait until you hear the rest of it.

Unlike the yesteryears that is the 1960s, 1970s, 1980s and the 1990s, today, the durian industry in Malaysia has come out to have successfully evolved species and high quality durian fruits.

A few years ago, we saw only the advent of D2 and D23. Yes, they were costly then. If previously, we durian lovers had very few choices to choose from. In 2015, the availability of mouth watering durian fruits of today such as 101, the Musang King, the Super XO series, the Mau Sang Tong and others spell bound durian lovers.

Say what you like about durian, this fruit looks like its not meant for the consumption of Europeans or foreigners. Presently, I am in the process of tutoring an English girl, she is 23 and an internet English language teacher. 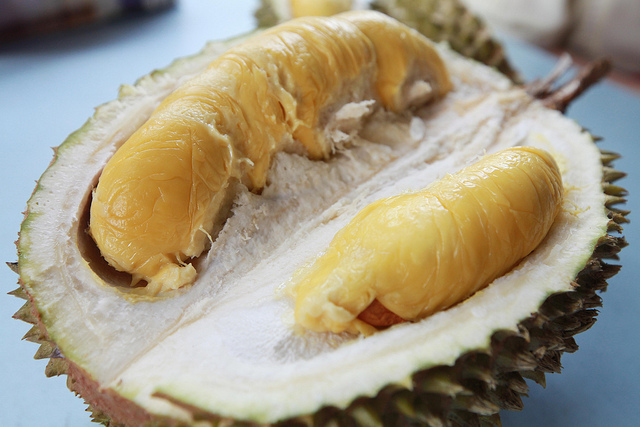 Recently, she was asked has she yet tried tasting durian. Her reply was, “I have not”. Anyway, she said she fancies the mangosteens more.

To end this short story about the Malaysian King of Fruits, permit me to tell you one of why my teachers told me as a school boy years ago. He said, Europeans consider the eating of durians as likened to consuming a custard pie in the toilet. Urgh! Or is it? Decide for yourself.

The remaining stories pertaining to this fruit will most likely be followed up in another article on a later date.