How many of us ever wonder or even take the time to ponder, that life is indeed full of a long list of “waitings”.

On Father’s Day, my family members and myself, were at a simple, neighbourhood restaurant to have our dinner. There were infact not too many tables then. Only may be 9 or 10 tables or so.

But the sad thing was, there was only one lady cook at the said restaurant. So, whether we liked it or not, the cook politely told us, we have little choice but to wait for at least one hour.

After completing for my senior Cambridge and Federation of Malaya certificate (F.M.C) examinations way back in 1962 to be exact, the waiting period then began. My friends and I had to wait for more than 3 months before our results were finally released. Well, another period of waiting, didn’t I tell you earlier.

My son, Wee Li, left secondary school in 1994. All his classmates have since gotten married or settled down and have since raised families of their own. Believe it or not, some of his close classmates have even managed to have 3 or 4 kids by now.

But whether you wish to believe what I am saying or otherwise, surprisingly some have even landed up in divorces. One of his close classmates that I know of, is presently awaiting for his lawyer’s documents and for the court proceedings to begin. May be in another few more months of anxious waiting, the above friend will finally be freed of his tensions. All his worries hopefully will soon be over.

It is a sorry and sad situation. But that’s the way life is. Some marriages, I’m sure you’ll surely agree, lasts a life time. Well, some lasts only a short while. Good and lasting marriages, they say, are made in heaven. They last a long, long time, till eternity, some people seem to say.

Well, coming back to my son’s case, out of 40 or more classmates, he is still single and not yet married. I believe he is the last of the “Mohicans”, already in his mid-thirties and still s bachelor.

Anyway, readers, especially the girls and the mother, shouldn’t worry too unduly. My son, underwent his wedding registration at the famous Thien Hou Kong temple in Taman Seputeh on the 22nd of May, 2011. The big day has been set for the 30th of October, 2011. 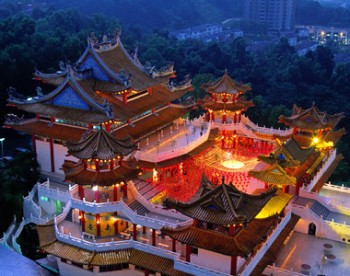 Well, didn’t I tell you that life is full of “waitings”. My son has to wait for a few months more before the auspicious and happy day arrives.

My first daughter, Swan Nee, is now happily married with two lovely girls. One is now studying in standard two in Sekolah Taman Rimau, near Kota Kemuning. The second daughter, is in kindergarten. She should be attending regular school in 2012.

Well, even kids have to wait, didn’t I say earlier? Anyway, before the birth of my first daughter, Swan Nee, my wife, Mary, like all mothers around the world, had to wait for more than 9 months, before my daughter was finally born. My daughter was scheduled to be born, the doctor said, during the month of August, to be exact.

But do you know what happened? My daughter finally decided to be born on, of all days, Malaysia Day, 16th September, 1971, approximately 2 weeks or so late or overdue, as medical people say.

And what did my wife have to bear? Another period of waiting! Do you know what a period of anxious waiting for her first baby feels like? If you were to be a mother yourself, I’m sure you’ll certainly know the feeling of tension, worry and excitement one has to undergo. That’s only what a mother goes through. What about the anxiety the would be the father has to go through waiting for the arrival of his first baby?

Men who have to shave their beards everyday, also go through a process of waiting. The process of shaving takes from 5 minutes for some people, to 10 or 15 for others. In one week, a man has to waste some 90 minutes to shave himself so as to be presentable. Calculate this in 1 year, you will discover quite a lot of time is indeed wasted for shaving alone.

There was a survey made to demonstrate how much time men have to spend on shaving alone. But unfortunately, I have forgotten where I kept the article.

If you are told, that mankind goes through a period of waiting all their lives, then obviously this conclusion would be incorrect. My maternal grandmother, whose maiden name was Ee Siew Mooi, was nearly 85 yeas old when she passed away. Although my granny was old, nevertheless, she was hale and hearty. Strong and fit so to say.

You may not believe the above story I’m unfolding into you. But my grandmother’s only daughter, that is this writer’s mother, Ong Geak Tee, similarly died the same way her mother did. My beloved mother died at the age of approximately 68 years old. Yes, I admit, my mother was weak of heart.

The medical doctors had earlier told us so. Like her mother, my mum also passed away peacefully in her sleep. She did not have to wait for her time to come. Again, the good lord spared my mum the pain and sufferings which most people undergo. Strange, but all these things which I’m talking are true stories.

In relating to you about how people have to wait for a long time before we manage to get things we want to be done, it is only fair and appropriate that we make mention about waiting, while attending a function, especially so at Chinese wedding dinners.

I dislike attending wedding functions. They are indeed very, very time consuming affairs. Chinese weddings are normally scheduled for 7.00 o’clock. But in most cases, the above functions do not begin until 8.00 or 8.30 p.m. Just imagine having to wait for one and a half hours before we are allowed to enjoy eating our dinner.

We wait for interviews to begin. We have to wait quite a long while before a movie begins. At home, we have to wait for our turns to use the family toilets at times. Waiting for food to be served at the restaurant is something normal.

In short, life is actually a long series of waitings. Besides, what I have mentioned earlier, don’t forget that we wait for hours and hours while our wives do their shopping for dresses, shoes, and other paraphernalia, especially during festive occasions, like Chinese New Year, Hari Raya and Deepavali celebrations.

I personally have come across husbands who wait anxiously at supermarket and malls many, many times. That’s what life is all about. A long list of waitings!

Do you want to know the longest period of time I had waited for something to take place or happen? Well, I feel the longest time I have ever waited must surely be the incident whereby I waited for dawn to break at the Pudu Raya bus terminal in Kuala Lumpur, way back in the 1980’s.

You see, I had departed Butterworth bus terminal at 12.00 p.m. one afternoon. The bus was to arrive at Kuala Lumpur Pudu Raya Station by 8.00 p.m. at the latest. But due to heavy rains along the entire route from Penang to the federal capital, the express bus finally only managed to arrive at Pudu way past midnight.

By that time, the bus service to my hometown, which is located at Klang, had unfortunately been suspended to travel back to Klang, the taxi drivers demanded a whopping RM50, which I could ill afford at that time.

Rather than giving in to the demands of the taxi drivers, I decided to stay put at the Pudu Raya bus terminal from 12 midnight until dawn broke at 6.00 a.m. the next morning. The “wait” lasted more than 6 hours. It was the longest period I have ever experienced waiting in my entire life.

Reflecting upon this long wait, it has become somewhat of an experience to me. I now use it as a yardstick, especially when I’m faced with some difficulties or obstacles. I always remind myself, that I could get through the “longest” wait of my life at Pudu Raya, there surely must exist nothing in this world which I could not possibly overcome!

After quoting and reflecting to readers episodes of times when we have to wait before things are done, thereby proving that life is in reality a long series of waitings, I feel pertinent that two other stories should infact be related as well.

Waiting For The Letter

The first regards a short story entitled “Surat” or in English “Letters”. The above episode was set in India. It’s a matter of fact, it was in the 1950’s when India had just obtained her independence. This “touching” sad story has it there was once an old Indian father, whose only daughter had moved to neighbouring Pakistan. The father indeed loved his daughter very much.

Before the daughter separated from her father, the father had implored that his daughter not forget writing letters to him. Every day, the old man would walk miles from his village to the nearby post office to inquire of the Post Master if by any chance, there was a letter for him from his daughter. When told that there wasn’t, the old man felt extremely sad and utterly disappointed.

One fine day, after many years had gone by, the Post Master called out the old man’s name. But the surprising thing was, the old man was not around to receive the letter which was meant for him. Years had passed by, but when a letter had really arrived for him, he wasn’t to be around.

Other village folks, told the Post Master that on the day the letter from his daughter did in reality arrive, the poor old man had died! He had waited in vain for years, for a letter which never arrived.

Finally, this article highlighting the maxim that life is in reality a long series of waitings, that we have to wait at traffic lights, and that we sometimes have to wait at long queues while waiting to pay our utility bills or collect our medications at hospital counters.

One story that is connected with waiting, should by right include the story of a Singapore man. It was said the man bought a new vehicle. He was reported to be an ardent punter of 4 digits numbers. Without fail, the man was said to have betted upon his car number for years. Unfortunately, his number never came up.

But the story has it, the man never gave up hope. He believed that one fine day, his car number would eventually come and he would strike a lucrative prize. His wait finally ended in vain. On the day his car number finally came up 1st prize, the man had died! Believe it or not, it’s all up to you!