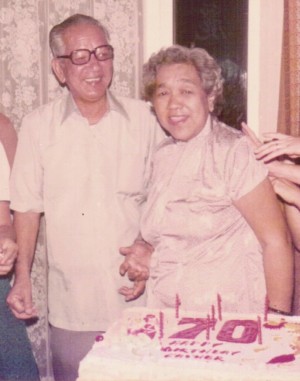 My father, Yap Thian Yew was a handsome, Eurasian looking man, standing nearly 6 feet tall. He was a “Baba Melaka” or “Straits Chinese”. The picture on the left is my father together with my beloved mother celebrating his 70th birthday.

Father passed away in 1987, some nearly 20 years ago. He died after a short illness. The last thing I can still remember about my father was, my elder brother and myself going on a rented launch or a big motor boat into the Straits of Malacca, holding on to my father’s ashes in a big, earthen ware “urn”, to carry out our final, filial duty to my dad who had passed away.

Being stern Buddhists, we believed that the ashes of the dead should be thrown into the wide open sea, whereby the spirit will be able to roam this entire world upon one’s demise.

My father, I was frequently told, became an orphan at the age of 5. Both his parents died. And father, although born in a “Yeoh” family, was adopted by an aunt from the “Yap” family.

My aunt was a good mother. Looking after my father, showering him with lots of love, as any good mother would be expected of.

If you have read my earlier article in my blog, in “A Grandfather Whom I Never Saw or Met”, my dad’s father or my grandfather to be exact, was Yeo Guan Hup. His majestic looking 100 year old grave lies today in the Simpang Lima Chinese cemetery in Klang.

Yeo Guan Hup, my grandfather was a philanthropist and a well known Chinese businessman, who lived during the era of the British resident Sir Frank Swettenham. That was in the 1890s, some nearly 120 years ago.

My grandfather, I was told, had many wives. A minimum of 4, I think.

Grandfather, although a wealthy and well known Chinese businessman, died leaving behind nothing. He must have squandered away all his wealth, enjoying the “rocking eighties”, so to say.

But my grandfather,Yeo Guan Hup, did leave a legacy for us family members, especially for my dear dad. Being a J.P. or Justice of Peace, he was awarded a short stretch of road near the present, famous Little India shopping arcade in Jalan Tuanku Kelana, Klang.

Today, after more than 100 years have since gone by, the road which was named after my grandfather, still remains. My father is no longer around today. But if he were to be alive this very day, I’m sure he would feel mighty proud of his father’s achievement.

The road which the British authorities named after my grandfather, Jalan Yeo Guan Hup is still around to this very day.

To know more about the history of my family, please read other articles you can find in this blog.

The purpose of relating all these stories to you in this article is to relate to you readers how as a 17 years old lad, and while only in Form 4, I took my first driving lesson in my father’s 7 ton Bedford lorry way back in 1961.

In fact “took” is a wrong connotation of what I did. “Stole” my first driving lesson in my father’s lorry would be a more appropriate term to use.

Like any young and eager school boy, barely 17 years old, I had intense interest in wanting to know how to drive. As a strict and stern dad my father was, there was no way that I could have asked him to instruct me driving. Furthermore, my father did not possess a family car either.

But as the saying goes, “Faith can move mountains”, they say. So wanting to learn how to drive so earnestly, lead this scrawny looking, 108 lbs lad scheming to take his father lorry for a spin, one fine day.

Before doing that, I had observed carefully how my dad manipulated the gear systems of his 7 ton Bedford lorry, many months earlier.

One day, when my dad was not around, I took the keys to his lorry and with a friend, Ah Swee, sitting beside me, bravely took the huge lorry for a drive around our secluded kampung.

We were then staying at Lorong Raja Muda, Klang. With a heart throbbing away furiously, I took a crank at the ignition keys of the lorry. The lorry immediately burst into life.

Doing what my father usually did, I put the vehicle into first gear. Releasing the clutch gradually, the lorry inched its way forward slowly and yet precariously.

We were in fact heading straight ahead for a latrine or toilet situated near a small river. The lorry came to a halt a few feet from the kampung latrine.

Panicking, I was trying my utmost best to put the huge vehicle into reverse, but instead ended up in putting the gears in forward gear and the vehicle inched forward further.

I was unable to do no such thing. The thought of my entire kampung having no toilet to use if I had knocked the latrine into the river, brought cold sweat to my forehead.

For this, I was sure, my father would skin me to death, so to say. Not forgetting also the curses of the entire kampung people upon me.

What a relief it was!

We finally managed to reverse the lorry back from whence it was parked originally. This was to prevent my father suspecting what we had done. A probable accident in fact had been averted.

Thinking over what I had done as a 16 year old lad, I now realize that my actions were stupid. To all young people contemplating to take your dad’s car for a spin, my advice is, do get your dad’s permission first. I’m sure that he will only be too happy to teach you how to drive.

Remember though, do not do what I did. If I had known about the Road Transport Act 1978, like I do today, let me tell you frankly, I would not have done what I did nearly 50 years ago!

By the way, Section 26 (1) of the above act, stipulates “to drive a vehicle, one has to have a driving license”.