In a traffic court case held in Ipoh, Perak, Mohd Kamil Rashid, the express bus driver of a double-decker bus belonging to Sani Express was handed a 4 year prison sentence. Kamil’s driving license was also suspended for a period of 3 years. A RM10,000 fine that was also imposed by Magistrate Mohamad Ruhizat Abdullah, sealed the driver’s fate. 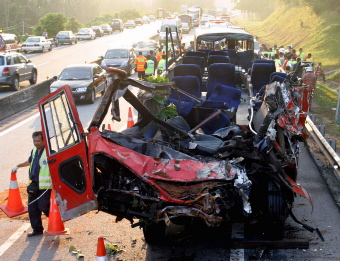 Readers, I am sure will surely remember the incident whereby 10 passengers of the Sani Express, lost their lives, as it crashed along a highway back in 2009. Under the Road Transport Act 1987, Mohd Kamil Rashid, the bus driver was charged via Section 41(1) with reckless driving and causing the deaths of 10 passengers at KM272.7 of the North – South expressway on 26th December 2009.

When the accident was first reported and appeared in the newspapers in 2009, the public then in fact did not have a clear picture of what had happened that fateful night. Three years have since elapsed the night, the fateful incident occurred. The traffic court case held recently at Ipoh, Perak, has given us a clearer picture of how the incident actually occurred.

What really happened on the night of 26th December, 2009? How did the accident occur, readers would like to inquire.

A study about the circumstances revolving around the incident is important. It will go a long way to assist the relevant authorities, as well as the company or companies involved, to learn from it and prevent similar incidents from happening in the forthcoming future.

The reasons why the accident occurred that night are many as has been revealed in the court case. One was that a double-decker bus should not have been travelling so fast. It was in fact, speeding so to say. Bus drivers of future double-decker buses should keep in view this important fact.

Sources say, the driver was going at more than 90km/h. The courts reiterated that even though the double-decker bus exceeded the speed limit permitted by only 1km/h, it was nevertheless a speed that was in fact dangerous.

Secondly, the bus was said to be swaying from left to right prior to the accident taking place. This proves that the driver of the double-decker bus was unable to control it properly. Excessive speed was most likely to be the contributing factor for this happening. Although the bus driver told the court hearing that he had only exceeded the speed limit of 90km/h, the fact remains that a speed of 90km/h for a double-decker bus to travel, especially at night, would be considered as being fast and dangerous.

With so many passengers inside, the authorities should now consider carefully what the optimum speed of a double-decker bus should be. It in reality endangered the lives of the passengers inside which eventually lead them to their deaths.

Thirdly, according to the driver, Mohd Kamil Rashid, he told the courts that prior to the accident happening, a car from the opposite direction, with its headlights flashing, directly into his eyes, had caused the driver’s vision to be blurred for a few seconds. This caused the accident to take place.

Talking about the problem of blinding, white lights which many vehicles are said to be using these days, this issue of Xenon lights, which is in fact illegal, should be addressed by the authorities, that is the J.P.J. or the police immediately.

I earnestly suggests that the use of the above lights should be looked into seriously. If nothing concrete is done, more accidents will without a doubt take place in the near future, thus endangering the lives of the motoring public.

This article has decided to highlight the reasons why the double-decker bus which belonged to Sani Express crashed on the night of 26th December 2009. Hopefully, by studying all the reasons in greater detail, it would contribute towards preventing such horrific accidents taking place. And as a result, more lives would be spared.

To sum up this short article, three or four major reasons appear to be responsible for the double-decker bus crash. They are:-

b) Ferrying excessive number of passengers in the bus itself.

c) Illegal use of certain head lights such as xenon lights by other motorists.
d) The overall construction of the double-decker buses currently used, which appears to be rather flimsy, thus not capable of providing protection to passengers.