What You Should Know About Vehicle Engine Oil

What a vehicle needs for its radiator is water.

Secondly, it needs fuel, petrol or “gasoline” as Americans say, for it to run or move.

Duckhams, Mobil, Shell, Petronas, and Esso are but some of the well known engine oils in our country, Malaysia.

While in other countries, you must have heard of Repco, Havoline and the other famous brands.

Besides filling in engine oil into their engines, some motorists even go one step further.

They insert well known “additives” such as reknowned S.T.P. WYNNS, X.1.R and SLICK 50 to enhance their engine’s performance.

I was introduced to a well known additive in the market by an engineer friend, Mr. Fong, a few years ago.

Mr. Fong was then attached to a company, based in Pandamaran New Village, Pelabuhan Klang that produces vehicle shock absorbers and car seats amongst other things.

Unfortunately I have forgotten the name of the company to which Mr. Fong is attached.

It has been many years since we met.

If readers would like to experience how X.1.R and SLICK 50 perform, try using them.

SLICK 50, however comes in bottles of 950c.c. quantity and it costs a whopping RM135 without any discount.

SLICK 50, for readers’ information is only available in large supermarkets like Parkson and Jaya Jusco outlets. X.1.R on the other hand is rather easily obtained in most spare parts shop all over town.

The above two well-known additives are said to propel NASA’s “Challenger” space crafts to the planet moon.

These two engine oils are therefore approved by NASA itself.

Engine oil is for the lubrication of internal combustion engines.

The main purpose of engine oil is to prevent friction the moving parts of the engines.

On top of that, engine oil cleans the engine. It also prevents corrosion.

When metal parts of the engine grind against each other, certain parts undergo wear and tear.

Some parts become chipped as a result.

Besides that, engine oil cools engines, while at the same time, engine oil desipitates heat from the moving parts.

Basically, there are 2 types of engine oil.

One is ordinary engine oil.

The other is “synthetic” oil. 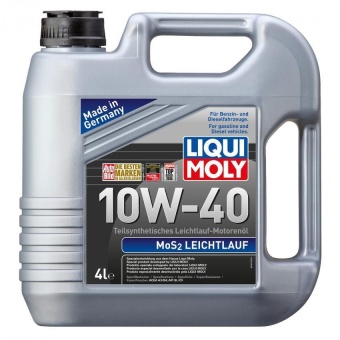 For the best semi synthetic engine oil at an affordable price, check out the MOS2 Leichtlauf 10W40 4L by Liqui Moly.

It is 100% made in Germany and is available at Lazada Malaysia.

The later can sometimes cost as much as RM200 per 4 litres can.

My son in-law Kin, when he was using his Toyota Hilux, used to use synthetic oil for the above said vehicle.

My late father, who was driving a 7 ton Bedford lorry way back in the 1960’s, used to tell me a few things regarding engine oil.

My dad, used to advise me that to maintain a vehicle’s engine well, a person should ideally:

i) Check one’s engine every morning before moving off.

ii) New engines should undergo a running in period for the first 1000 miles.

Then, the engine oil and filter has to be changed.

Thenceforth, my father said, engine oil should be replaced every 3000 miles.

Nowadays, engine oil should be changed at intervals of 5000 km.

What Are Engine Oil Made From?

Engine oil or black oil as it is called, is either made of either petrol based or non petroleum synthetic chemical compounds.

What vehicles or machines use engine oil?

What happens when engine parts rotate?

Friction leads to power loss of an engine.

As a result, fuel consumption increases.

Why an oil filter is important in internal combustion engines?

The corroding of metal parts or friction of moving metal parts in an engine produces tiny, microscopic metallic particles all the time.

Therefore, mechanics and car experts say it is pertinent that a good oil filter is used to filter out harmful particles from the black or engine oil.

As such, remember that changing engine oil without changing oil filters, is a pointless venture by itself.

Which type of vehicles in Malaysia normally have to use engine oil?

Most vehicles in Malaysia are 4 stroke engines.

Motorcycles, especially Honda vehicles are predominantly 4 stroke engines. Previously, Suzuki, Yamaha and Kawasaki motorcycles fall under the category of 2 stroke engines, which is said to contribute to pollution of our atmosphere.

Formerly, Vespa and Lambretta scooters, which were extremely popular in the 1950’s and 60’s, were also examples of 2 stroke machines.

I still remember how a small amount of engine oil (about 30 cents) worth was mixed into the petrol to prevent the engines from being jammed up.

Some motorists might wish to know what are the properties of engine oil.

Engine oil is said to be made from heavier, thicker hydro carbon based stock from “crude” oil.

Additives are sometimes added into the oil.

One most important property of engine oil is what’s termed as “viscosity”.

Viscosity is termed as oil thickness or a measure of resistance to flow.

A good engine oil should have the properties high enough to act as a lubricating film and at the same time low enough so that the oil can flow around engine parts, such as pistons, connecting rods, valves, rings, etc under all conditions. 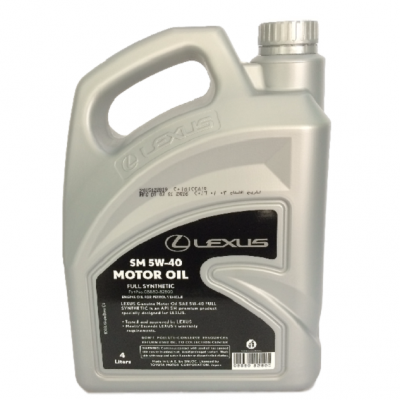 For the best fully synthetic engine oil in Malaysia an yet not too expensive, check out the Lexus 5W40 engine oil.

The oil is made by SNLOC and uses licensed technology from Toyota Motor Corporation of Japan.

Engine oil must be capable to flow at the lowest temperature to minimize metal to metal contact between moving parts, especially when the engine is initially started.

How are engine oil graded?

Are you aware that the Society of American Engineers (SAE) has developed a numerical code system for engine oil.

Engine oils are graded from low to high viscosity.

The engine oil has an alphabet W behind it.

My late father used to tell me as a 13 year old school boy who is very interested in all things pertaining to cars, that new vehicles should ideally go for lower SAE engine oils, eg 10W or 20W.

Like SAE, API sets the minimum performance for lubricants produced in America.

And finally, all vehicles owners are hereby advised that when servicing your vehicles after a certain duration of period, remember always to also change your oil filter as well.

Your engine oil, can vary from 3 to 4 litres or even more than 5 litres for larger vehicles like lorries and trucks.

My Kancil car which is only a 3 cylinders and 660c.c. engine capacity, has only 3 litres of engine oil.

The Kancil has only 3 plugs too.