It was just a matter of time. What happened recently, was bound to happen. While other countries such as America, Australia, England and even China have introduced the electric car or better known as E.V., into their markets, Malaysia was still lacking far behind.

To date, there are a few companies in Malaysia that have introduced the hybrid cars here. Examples of companies that have done that include Toyota Motors, Ford Motors, and Honda Motors Malaysia. Hybrid cars run on a combination of conventional engines and petrol. Honda’s Insight and Toyota’s Prius are two examples of hybrid cars that have made headway into our Malaysian market. 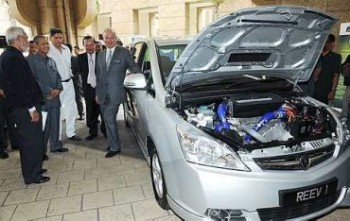 For a fairly long time now, the Malaysian authorities have been troubled with the problem of global warming. This has led to Proton Malaysia to come up with a range of eco-friendly test vehicles. Two electric vehicles that were introduced into Malaysia recently include the Saga E.V., which is designed for zero CO² emission and the Exora Reev (Range Extended Electric Vehicle). The later is specifically designed to reduce fuel consumption as well as CO² emission.

It should be noted here that the 2 above mentioned cars namely the Saga E.V. and the Exora Reev were produced as a result of co-operation between Proton Malaysia and the British company of Fraser Nash Research Limited. Work on the Exora Reev commenced as early as 2004. For the Saga E.V., work on it started approximately in 2008.

A few interesting things about the Saga E.V. and the Exora Reev include:-
i. The Saga E.V. has no internal combustion engine.

ii. The Exora Reev has a small engine of 407cc capacity. The Kancil has a 660cc engine.

iv. On the other hand, the Exora Reev is capable of doing 700km on a full charge and a full tank of petrol of 23 litres.

Furthermore, both of the above 2 cars are supplied with Lithium ion batteries. It takes some 6 – 8 hours to charge them. It also uses a normal household 13 amps plug to do the charging. While the Exora Reev is a 7 seater vehicle, the Saga E.V. is said to be a 5 seater sedan. Just like MyVi, Kelissa and Altis.

And now, we arrive at the most important thing regarding the electric vehicles recently introduced into our country. The “price”!

Without a doubt, both the Saga E.V. and the Exora Reev are 30% – 40% more expensive than the current conventional cars. But buyers must remember a few things, they save on fuel and road taxes and are also said to be relatively cheaper to maintain.

A grand total of 9 cars have been handed over to the Government for initial tests. In the meantime, it would take at least 2 years for the Saga E.V. and the Exora Reev to be mass produced. In the meantime, the public will have to be patient.

The Ministry of Transport on the other hand has put amendments to the Road Transport Act 1987 on hold. Hybrid cars as well as fully electric cars such as the Exora and Saga E.V. will therefore have to wait a little wee bit longer to know its fate.

Although the 2 models of electric cars namely the Saga E.V. and the Exora Reev are said to be eco-friendly and does not pollute the atmosphere, users in our country, Malaysia should not jump with joy too soon over its introduction. Without a doubt, the price of petrol is currently very high here. That it will go up even higher in the near future is without saying a possibility.

But what Malaysians should be asking is “will electric cars solve our problem?” Electricity bills today represent one of the highest household items most consumers have to pay each and every month. Most households in Malaysia today pay a sum of at least RM150 to RM350 for the use of electricity. Some are said to pay even higher rates. It’s an expensive commodity.

Electric cars as one is aware have to be charged nightly for a span of 6 to 8 hours. Calculate it for a month and you will surely be able to decipher how much your electricity bill will escalate every month.

Therefore, what I like to remind you is, are electric cars going to be an answer to our soaring problem of high fuel prices? Think about it carefully and make your own decision for yourselves.

The second problem which Malaysians should contemplate is this. Most Malaysians live or stay in single or double storey terrace houses. There might be some who are lucky enough to own semi-D, bungalows or bigger houses with gardens and spacious lands around it.

Contemplate for a moment, if you happen to own an electric car in the near future, and you also own a single storey terrace house with a porch, which is only capable of accommodating one single automobile in it, whereas your family owns three to four vehicles, can you envisage the problem you’ll face trying to charge your electric car for a span of 6 – 8 hours every night?

Before concluding this short article on electric cars, permit me to provide you with another hypothesis to ponder about. Assuming that you will be going to another town, and you will be residing in a well known hotel there, your vehicle will normally be parked in the hotel basement car park. And your car needs to be charged for at least 6 – 8 hours for it to be used for your journey back home to Kuala Lumpur the following next day.

Permit me to ask you one pertinent question. How do you then solve your above problem? Unless hotel management and other large organizations prepare themselves to be equipped with 13 amps 3 pin plugs in their basement car parks, without a doubt, we Malaysians will be faced with a rather massive headache on our hands when electric cars come along.

Any new introduction or invention will always have its pros and cons. While feeling elated and excited over the introduction of electric cars into our country, we should as a matter of fact, think about the difficulties and problems that may accompany it.

America for example, has taken steps to build battery charging stations for electric cars all over the country. Petrol stations, service stations, supermarkets and so forth are all being prepared for the day when electric cars will make its appearance there.

It won’t be long before electric cars are introduced on a large scale here. We should be in fact been taking the same concrete steps to meet this problem head along now itself.