How To Fill Up Petrol At Petrol Station Correctly

In my last blog post, I wrote about what you should do if you mistakenly filled up your petrol car with diesel.

You can read about my silly mistake at “What To Do When You Accidentally Filled Diesel Into Your Petrol Car?” post.

After making the mistake of pumping diesel into my petrol Perodua Kancil, as a driving instructor for many years, I’ve now decided that I should teach my young students, who are mostly 17 or 18 years, the correct manner to fill up petrol at our petrol stations

I usually advise my students the proper and correct way of filling up petrol or “gas”, as they say in America. 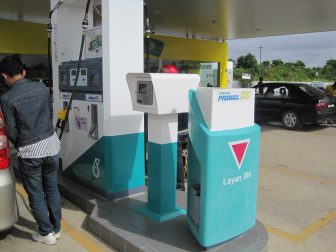 Amongst the many advice usually given include:-

1) Ensure you as a driver, drive your car into the square space next to the petrol pump.

The petrol pumps are normally numbered 1 – 10.

2) Ensure that your car is placed approximately 1 – 2 feet from the pump.

3) Make certain that the pump you’re entered into, issues or supplies the fuel that you require, that is “petrol”.

4) Fuel in Malaysia are normally of 2 varieties.

5) After ensuring that you have indeed landed up in the correct pump, locate the position of your fuel tank.

It would be either be on the right or left side of your vehicle.

In most vehicles, you’ll have to pull a lever to release or “open” the cover to your petrol tank.

However, in older vehicles, a key would be required to open up the cover.

Some newer cars even use the “sensor” touch system.

In one of my other articles on Ford cars, Fiesta, Mondeo and Focus versions of its latest models makes it unnecessary for motorists to unscrew the cap to the fuel tank.

After you have located where the petrol tank is and what to do with it, the next step would be to approach the counter to order the amount of petrol you would like to insert into your vehicle.

6) Assuming that a motorist would like to fill in a RM50 worth of petrol into his or her car.

Tell the counter clerk the amount you want.

You can either pay cash or use your credit card should you have one.

In most petrol stations, the operators supply motorists with rebates or discounts.

Cards such as “Smile” and “Bonuslink” are examples of rebate cards available in the market.

The points collected can be exchanged for drinks, toys, umbrellas and even food from time to time.

During festive seasons, like Hari Raya, Deepavali and Chinese New Year, boxes of packet drinks are offered to motorists.

All in all, it is a great way to repay motorists who patronize these petrol stations.

It is my opinion, a move that encourages healthy competition amongst petrol station operators, should be encouraged.

What should an inexperienced motorist who has just got his Probationary Driving License (PDL) to do after he has made payment at the counter?

Well, the next step is to decide which type of petrol he wants.

The best alternative is to choose RON 97.

It may be slightly more expensive, but RON 97 is said to give motorists better acceleration, more power and protect engines eventually.

7) After opening the cap to the petrol tank, place the nozzle into the tank, and depress a small lever at the base of the nozzle.

Observe the meter at the pump depicting the amount of petrol you have ordered.

Make sure, the pump issues the correct amount of fuel you have intended to purchase.

8) After completion of filling in the amount of petrol required, remove the nozzle from your petrol tank and replace it on to the pump.

Ensure that the fuel tank cap is put back tightly.

You have thus successfully succeeded in filling up petrol which your car requires.

With this article, it is hoped new and inexperienced drivers who have just got their P licenses, will from henceforth find it easy to fill up petrol which your car requires.