With the completion of this 3rd article about “lines”, hopefully it would further be unnecessary to answer any further inquiries regarding lines.

There exists two types of lines that has yet to be touched upon.

One, there is the white line or yellow lines, normally running along our roadways. Many actually do not seem to comprehend the meaning of these lines.

If you should see a white or yellow line running beside the road, in the town areas especially, it means “No Parking”. 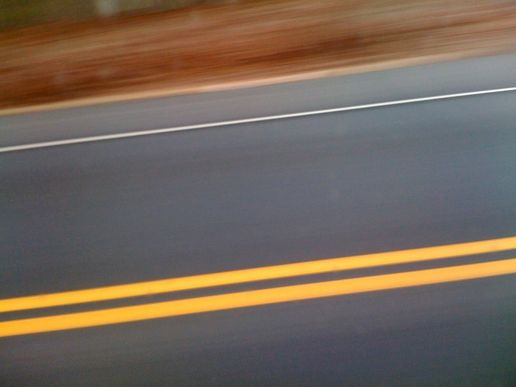 Irregardless as to whether you find a double line or a single straight white line in the middle of the road. Again, it means no parking!

Do not contravene. Why, you should know by now.

However, at times we see a white line running beside the road, even when we are driving out of towns of in kampung areas. Then these lines have a different meaning altogether.

What do these lines then indicate to the driver?

Such white lines are actually “shoulder” lines or lines to show road shoulders.

Permit me to explain further.

When driving at night, you see, our vision isn’t too good. In driving at night at high speeds, especially when out of towns, going into the kampung, a driver has problems anticipating where the road shoulder actually ends.

Difficulty in trying to locate where exactly the road shoulders ends, may eventually lead us to driving out of the road, losing control of our vehicle and landing up finally in the ditches itself.

In other words, driving at high speed, going out into the uneven road shoulder will cause the driver tremendous danger.

So, in short, road shoulder white lines running along the highways is extremely important in assisting a person’s driving, especially at night and during the rain.

As the road shoulder while line is important, so also is the dividing white line in the middle of the road, especially at night.

Do you know that when driving fast at night, a driver can only see 50 to 60 percent?

Front lights of the vehicle cannot show you 100 percent vision. A driver thus has to depend the rest of his vision on the vital white line in the centre of the road to get him out of trouble.

I have to commend the department, who after laying new roads and highways, do without fail, quickly make it their responsibility to paint the while lines on the road as soon as possible. Kudos to them actually!

1) If You Don’t Understand Street Lines, You’ll Hate Yourself Later

2) The Differences Between Single And Double Lines On The Road