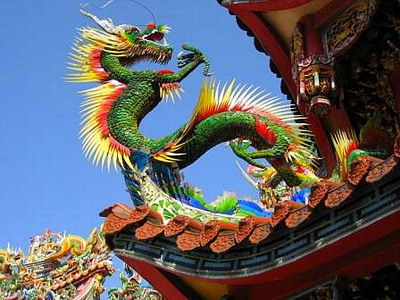 Like Joey yap, Malaysia’s leading expert on feng shui, Hong Kong’s leading authority on geomancy, Si Tou Kin Fu, says that the element of earth is especially pronounced in the year of the Dragon. For non Chinese, who may possibly not know anything about the Chinese calendar or almanac, the Chinese name their years according to 12 animals.

Last year, I remember, was Rabbit year. 2012 is supposed to be the year of the Dragon. And it is a water dragon, so say the Chinese feng shui experts, Joey Yap and Lillian Too. Believe it or not, on New Year’s Eve this year, the 22nd January of 2012, it rained very heavily and for quite some long hours. I won’t be surprised if a few kampungs or villages would have been flooded anyway.

My family, in a way, believes to a certain extent, in feng shui too. Otherwise, why would my wife, Mary insist a so adamantly that my son, tie the nuptial knot on the 30th October, 2011. True my son was already 34. But more important, was the fact that 2012 was a dragon year, a good year, so the Chinese believe. And the Chinese also believe that this year, will be good for producing babies.

Readers may not be aware, but do you know a dragon baby about 3 to 5 years old, should ideally be allowed to roll on a newly wedded couple’s bed prior to the wedding taking place? The above practice is very much alive among the Chinese today. It is believed to bring good luck and prosperity to the to be married couple. Well, whether to believe or not solely depends on you.

Talking about the year of the Dragon fact or fallacy, depends on your beliefs of Chinese feng shui and superstitions. My own father, Yap Thian Yew, who passed away in 1987 and the ripe old age of 78, was born in the year of the Dragon too, in 1915. But my mother, the late Madam Ong Geak tee, told our family, that father was infact an earth dragon baby.

My late father also had exceptionally large ears, the Chinese believe, people with big ears are destined to be rich and prosperous, have an easy life, and strike a lot of lotteries and so forth. But in the many years that I knew my father before he died, no such predictions or characteristics of his dragon birth ever came to pass. Maybe, it was just my father’s luck after all.

In my personal opinion, my late father led an extremely difficult life. My father, he personally told us, said that he was orphaned at the tender age of only 5 years of age. Father was then brought out from a remote fishing village of Batu Laut, near Morib, in Selangor to Klang. He was entrusted to an aunt, Madam Tan, living his young and difficult days at our family ancestral abode at No.138, Kapar Road, Klang.

To be fair to my auntie, Madam Tan, she took care of my father like her own son. My father, I believed, could not have asked God for a better mother than his foster mom, Madam Tan. And so, my gratitude and thanks to the remaining children and grand children of the above grand old lady, our family’s thanks for taking care of our dear, old and beloved father, especially in his younger days.

Stories has it, it was Madam Tan, my auntie, who saw to it that my dear old dad found a young wife to marry in my mother. To say that my father, who was as I told you a dragon baby himself, led a hard and difficult life, would be most untrue. From time to time, father had his shares of good times and lucky fortunes.

I can still remember once, around the years 1950’s or 60’s, father struck the 4 digits for the number 1275. He Hs been following the above number for years. He was so elated and happy. Although the sum my father won was only but a small amount of a few thousands dollars, it made my father extremely happy indeed. I don’t believe I have seen my father so happy before as on the day he struck the above prize!

For those reading this story on The Year of the Dragon, do not be dismayed with tales I have related to you yet far. I believe that my father’s fortunes is but an exceptional one. In fact, there is those more to it, please believe me, regarding those being born as a dragons.

Hong Kong, which is today, a bustling hub of economic activity, is said to possess some of the world’s richest property tycoons. They were infact all born in the Year of the Dragon. Geomancy experts say, all of them can expect a prosperous 2012 under their auspicious birth-sign.

As I reiterated earlier on in my article, the element of earth is very pronounced in this 2012 year of the Dragon. People who are born in the year of the Dragon therefore, will have an advantage in business related to the earth, real estate, for example.

Hong Kong’s richest man today, Li Ka-Shing, was born in the year of the Dragon in 1928. As the chairman of Cheong Kong Holdings and Hutchinson Whampoa, Li Ka-Shing has a net worth, believe it or not, of US $22bil (RM 68bil) and is ranked the 11th richest man in the world by Forbes billionaires list today.

Finally, there is Raymond Kwok, another dragon baby in his own right, and of the Kwok clan, Hong Kong’s biggest developers Sun Hung Kai properties. The family, it is said is ranked 23rd on Forbes billionaires list in 2011.

Talking about dragons and those who are born under this auspicious sign, I wonder under what signs were Vincent Tan, Tan Sri Lim Goh Tong and Air Asia’s Tony Fernandez, to name but a few, were born under Dragons, perhaps? It couldn’t be chicken like myself, definitely!

A latest report on the subject of feng shui from Hong Kong, made a startling revelation regarding babies born in the year of the Dragon. According to the Ten Thousand Years Calendar, or the Wan Nian Li, an invaluable reference used by Chinese geomancers, those born on the 1st day of Chinese New Year of 2012 are in fact not dragon babies.

With this latest revelation, readers will now understand why my late father, who thought he was in fact a dragon baby, was in reality, not a dragon baby after all! My father therefore, was not able to draw upon the good characteristics of a dragon, during his lifetime.