What is an International Driving Permit (IDP)?

Firstly, an IDP is also commonly referred as an International Driving License.

Calling it an international driving license is incorrect.

An IDP is actually derived from your country domestically issued driving license.

For Malaysian, it would be the full driving license or the Competent Driving License (CDL) issued by the Jabatan Pengangkutan Jalan (JPJ) or the Malaysian Road Transport Department.

Why do you need it?

Before I proceed, I just want to make it clear for those that are not aware.

In fact, JPJ has published a list of driving licenses from 154 countries which are recognised and valid to be used in Malaysia.

Let’s get a bit technical.

A driving license issued under the corresponding provisions of any law in force in any State which is a party to a treaty to which Malaysia is also a party and purporting to recognize domestic driving licenses issued by the contracting countries shall, so long as the license remains in force in that State, be deemed to be a driving license granted under this Part.

What does the above statement mean?

If that is the case, why do we still need an international driving permit?

Yes, that is a very good question.

The main reason why you need an IDP is language translation.

If were to look closely at your Competent Driving License, the details are printed in both Bahasa Malaysia and English.

Having our driving license details translated into English is very useful indeed.

As you know, English is an international language.

However, what if you are going to a country where the local people or the local authorities are not well versed in English?

For example, let say you traveled to Japan and you planned to rent a car for sight seeing.

The proprietor of car rental company would want to see some documentation.

They would want to see your passport and of course your driving license.

The people in charge of processing your car rental application may not be well versed in English.

Can you see the impending challenges you will encounter if you translate your driving license details to only the English language?

To overcome this problem, that is why you will need to apply for an international driving permit.

According to the AAA Foundation for Traffic Safety, the IDP is translated into 11 different languages.

Therefore, the IDP will speak the local language of the country you are visiting even through you don’t. 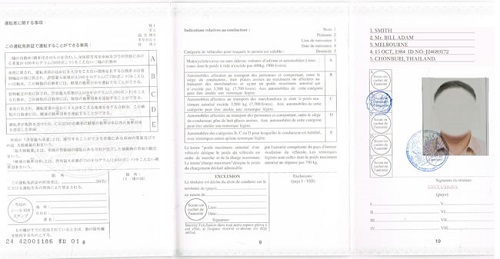 Inside the International Driving Permit

As explained in the paragraph above, you can use your Malaysian driving license to drive a vehicle in other county.

However, just to be sure you won’t face any translation issues, it is recommended for you to get an international driving permit.

The conditions to apply for an IDP are:

If you are still holding a Probationary Driving License (PDL), you are not allowed to get an IDP.

If your driving license has already expired, it is best to get it renewed before you apply for an IDP. 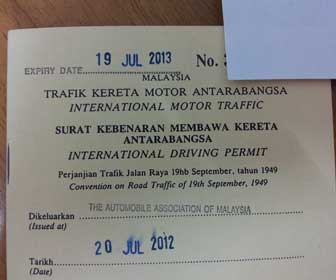 The international driving permit can be applied at the following location:

The rules and regulations are as follows:

a) Domestic driving license which is still valid for at least a year.

The price for the international driving permit is RM150.

The driving permit validity is 1 year.

When expired, the permit has to be renewed in Malaysia.

Can you have 2 driving licenses?

To my knowledge, you have to surrender your Domestic Malaysian License in place of your international driving permit as no one is permitted to posses 2 driving licenses in Malaysia.

If in the later stages, you no longer require usage of this said license (which is rather costly anyway), you could then surrender it for your Competent Driver’s License (CDL) later.

If you are coming to Malaysia for a holiday, you might be thinking, can you use your local driving license to drive in Malaysia?

The answer is Yes, you can.

But make sure your license is valid and not expired.

You can use the driving license issued by your country to rent a car or a motorcycle.

Be sure to observe the traffic rules on the road.

Remember, Malaysia follows the British traffic system, meaning all the cars on the road are Right-hand drive and we drive on the left side of the road.