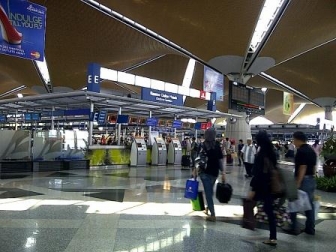 If you are a driver and you have been blacklisted by the authorities, for example the Road Transport Department, then you cannot pay your road tax. Or you could even be prevented from renewing your driving license.

You cannot even transfer a vehicle which is in your name.

In short, a driver will find it next to impossible to drive.

In a recent report, it is said half a million Malaysians are now reported to have been placed under a travel bar.

This means the above people have been banned from leaving the country. In simple language, these people cannot travel overseas.

They are now facing a travel bar.

Their offences include defaulting in their income tax payments, some are said to have not paid their educational loans, while some have been declared bankrupts.

Just recently, I asked my elder brother, who is a Registrar of Companies, how much must a person owe to be declared a bankrupt.

While it used to be RM12,000 a few years ago, my brother informed me that today the bankrupt amount has been raised to RM20,000.

Therefore, if there is anyone owing the above sum of money to someone, do be careful.

The person whom you own that sum of money can very well declare you a bankrupt easily.

Talking about bankruptcy, friends tell me, a bankrupt can arrange for his bankruptcy to be temporarily lifted if he so wishes. A bankrupt as you are aware of cannot travel overseas.

As such, if you are a bankrupt and need to travel overseas for some medical treatment, you could approach the Bankruptcy Department to have your status lifted for the time being.

This will then permit you to secure a passport for you to travel overseas.

After you return from your mission, your bankruptcy status will again be imposed upon you.

I know of 2 close friends who took educational loans from the authorities in the 1970s. I shall endeavor not to disclose their identities. Neither shall I reveal the department to which they were attached.

But the important thing is, both these friends of mine, as far as I know, never attempted to pay up the educational loans they received.

These loans helped to finally achieve their degrees. One of those people whom I am talking about has since passed away some 10 – 12 years ago. Another friend of mine has since retired.

Is it fair for the above two persons to have done what they did?

Shouldn’t they be responsible enough to repay the loan which the government gave them for their higher education?

By adopting such an attitude, have they ever thought that via their selfish acts, they have in reality prevented another poor student being given an educational loan from the authorities.

Speaking of youths who have taken educational loans, it is said some 46,887 youths between ages of 25 to 35 are soon to be blacklisted for not repaying their National Higher Education Fund (N.H.E.F.) loans which they took from the Corporation.

Action should have been taken on these defaulters a long time ago.

But as they say, “it’s better late then never”.

Talking about the N.H.E.F., I wish to reiterate that I speak of it somewhat as an authority.

You see, my own daughter, who took up a degree course in Multimedia University at Cyberjaya, took an educational loan of RM60,000. Since 6 – 7 years ago, when she started working, she has without fail been repaying her loan.

As far as I am aware, my daughter repays her installment some RM450 – RM500 for this loan.

But unfortunately, many of her friends who similarly took the same loan, does not seem to be repaying the load at all. And so far, no action has been taken against them.

At long last, the authorities have finally decided to take action on those students who have neglected to repay their outstanding loans.

Students who have failed to settle their loans taken will now be amongst other things, be :

i) Prevented from securing a passport and as such they are banned from travelling overseas.

ii) Cannot be allowed to take a bank loan to purchase homes.

Students who have taken educational loans in fact have been taking things rather lightly. They have now been banned from travelling overseas.

All in all, a total of 13 agencies such as Malaysian Anti Corruption Commission (MACC), Bank Negara Malaysia, the Securities Commission, Employees Provident Fund (EPF) and Prisons Department are but some of the departments seeking assistance to bar people from travelling overseas.

Besides students who have faulted in their repayment of education loans, it is said VIPs, celebrities and high profile individuals, Tan Sris, Datuk Seri and even Datuks are amongst those who are blacklisted and will not be no longer able to travel overseas from now on.

The travel bar it seems has finally fallen on them.

Through the travel bar, which will be enforced soon, as much as half a million Malaysian will be banned from leaving the country. The Tourism Department, I am certain, will be very happy with the government’s latest decision.