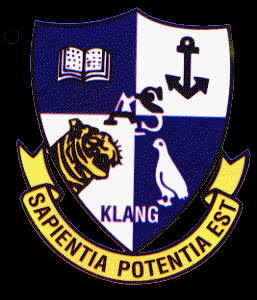 In an earlier article entitled, “My Alma Mater Anglo Chinese Primary School, Klang”, I mentioned being enrolled at the above school at the young age of 6 ½ years old. My father, Yap Thian Yew, was in fact a lorry driver. Why my dad decided to send me to ACS Primary School, I am not able to understand.

Maybe, it was because the Yap family, staying at our ancestral abode in Jalan Kapar, Klang, Selangor, were all English educated. My uncles Boo Choo, Boo Hock, Boo Swee and Boo Huat were all sent to English medium schools.

Even though my father became an orphan at the tender age of 5, nevertheless, he did attend school up to Standard 1 or 2. I can still recall rather vividly, my father being able to speak fairly good English.

My father’s greatest love was I would say, his yearn to know about current affairs. He always liked to read the daily newspapers.

While staying at Kampung Martin in Telok Pulai Road, father used to ask me to borrow the daily newspaper, the Straits Times, from our neighbor Mr. Lim Hai San. Mr. Lim and his wide, Madam Chua, have since passed away. In fact, his wife passed away just recently at a ripe old age of 87 years old.

The New Straits Times in 1957 costs only 30 cents a copy then. Inspite of that, there was no way our family could afford buying it ourselves.

Today’s article is not to talk about my dad. It’s in reality, to talk about my old school teachers. You could say it’s a tribute to them. As the saying goes, without my dear teachers, I would not be where I am today.

I attended ACS Primary School in Jalan Raya West, Klang from 1952 to 1957 and sitting my Standard Six exam finally. Who were some of my teachers while I was there at the above school?

Even though many years have now gone by, surprisingly, I can still recall some of them even today. In no random order, they are:

Mr. Ng was a rather tall and thin gentleman. He was quite a strict man. He taught us “Nature Study” and English in those days.

Mr. Ng was my class teacher, while I was in Standard Five. He, unfortunately, used to knock my head with a 3 feet long black board ruler. This made me, as a 11 year old boy, very afraid of him.

You see, Mr. Ng Yin Woot’s action against me was because I could not afford to pay my school fees of RM5 per month on time. Although my primary school days at ACS were rather traumatic, today, I bear no grudge whatsoever against Mr. Ng.

Maybe Mr. Ng, was only performing his duties as a teacher then. Again, is Mr. Ng still around today? Only heaven knows, as they say.

While I was in Standard Three, I had the rare opportunity to be taught by this Indian teacher, Mr. A.R. Singham. I remember him being a bespectacled teacher of average built. Mr. Singham, I recall today, was a very friendly and amicable person. He was in fact my football master in those days.

I was the captain of the school football team. I still remember out team playing against other schools in our district such as the Methodist Boys School in Port Klang, High School Primary Klang, even Pasar Road School, Kuala Lumpur.

My younger days under Mr. A.R. Singham as my football master were wonderful and enjoyable years. As a rather poor boy, I can still remember asking Mr. Singham for treats after our football encounters.

As a very kind man, he always relented to provide my friends and I the opportunity of taking mee hoon and other assorted cold drinks at our tuck shops which was located at the back of our school. All these treats were on Mr. Singham’s account.

Where is Mr. Singham, my football master today? Is he still around? If he is, he should be well over 70 or even 80 today.

As a young school boy, I don’t ever recall thanking Mr. Singham for his good heartedness. I believe it is not yet too late for me to express my gratitude and thanks to Mr. Singham.

Mr. Singham, thank you very much Sir! Thanks for making a poor boy’s school days worth remembering. Thanks for all your treats you provided us. God bless you!

A tall, long haired and handsome looking teacher, Mr. Kon Thean Soong (T.S. Kon) became my Standard Five teacher. Mr. Kon according to stories, was an ex-boxer before he became a teacher.

Mr. Kon, I remember used to tell the class interesting and exciting stories such as The Titanic and Tom Sawyer. He used to bring 8 ounce boxing gloves to the class. Boys who were naughty and talkative were asked to don the gloves and spar with each other.

Mr. Kon was actually my football master in ACS Primary School for quite a few years. Together with Mr. Singham, they trained our school XI team. I can still recall Mr. Kon who was from Kuala Lumpur, renting a room at Hing Lian garden near Methodist Girls School in Jalan Raya West, Klang,

The last I heard of Mr. Kon was that he eventually bought a lot of shares in Guinness Stout & Company in Sungei Wei, Selangor. He finally ended up becoming one of the Managing Directors.

Today, I believe Mr. Kon must surely be a multi-millionaire. Good for him! Congratulation sir, for having become so successful today. I am indeed proud of you.

My English teacher while I was in Standard Five and Six was Mr. Samuel Levins. Mr. Levins was a rather short man about 5 feet tall. He drove an Austin car which was black in colour.

If I’m not mistaken, Mr. Levins was a Ceylonese. He, I heard, passed away quite some years ago. Unfortunately, I have forgotten much about him. I am afraid that these are some of my primary school teachers whom I can remember still.

I often wonder where my teachers are these days. Are they still around? If they are, I would certainly like to meet them after all these years.

It would be a great injustice if ever I should forget to talk about Mr. Lee Hin Koy. Mr. Lee is rather tall man. After I left ACS Primary School in 1962, Mr. Lee, I heard rose to become the senior assistant of the school.

The headmistress at that time was none other than Ms. J. Proctor. Mr. Lee is a very friendly teacher. He was the ACS Old Boys Association secretary for quite a number of years.

Mr. Lee is renowned for his flair in English writing. I am not shy to say, Mr. Lee can write interesting and beautiful articles, especially those pertaining to old boys’ activities.

I understand that Mr. Lee is still around today. He should be at least well over 75 or even 80 years of age today.

The last that I head of Mr. Lee is that he is currently the co-owner of a well known public school which is situated at a hill next to the Istana Alam Shah in Klang. The name of Mr. Lee’s private school is Leethia.

To Mr. Lee Hin Koy, who tutored and guided me while I was young, thanks for everything. I sincerely hope that we will have a chance to meet one of these days.

Sapientia Potensia Est, said the slogan of our school badge. “Knowledge is Power”, so said the school motto. Tarry a little longer and I shall endeavor to write about my Alma Mater, Anglo Chinese Secondary School where I studied from 1957 to 1962.

I finally ended my days at the ACS Secondary School when I sat for the Senior Cambridge and the Federation of Malaya Certificate exam.