New Klang Bridge Completed – It Was A Promise Kept 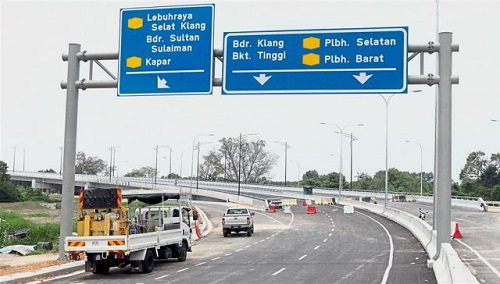 When young, I used to sing a nursery rhyme “London bridge is falling down, my fair lady”.

The Japanese army, built the famous Bridge of River, using thousand of British soldiers manpower and it was said they unfortunately perished during the 2nd World War.

Some 5 years back, the P.K.R., took over the Selangor government. Through good governance by the above, Selangor’s financial status quickly made it one of the richest state.

The then Menteri Besar Dato Khalid Ibrahim, announced the state government would finance the building of Klang 3rd bridge. This is to help ease the daily traffic jams faced by the people of Klang.

Upon the former Menteri Besar’s departure from office, the succeeding new Menteri Besar, Dato Azmin Ali, and his P.K.R. affiliates decided to continue with the construction of the 3rd Klang bridge.

Happy to announce that today, some 5 or 6 years later, “this” bridge is now finally completed.

This bridge is unfortunately out of the public limelight. Nothing much was heard about it because this bridge is infact located in the outskirt of Klang town.

Who is the contractor that built this bridge? I really don’t know.

The 3rd Klang bridge stretches from Riverside Road, near the famous Chinese Snake Temple to across the Klang River to Sungai Pinang in North Klang.

Recently, my youngest daughter and I tool the opportunity to travel across this latest architectural wonder.

Although nothing compared to our famous Penang Bridge, this 2 lane bridge will make crossing the Klang River in a matter of a few minutes.

At night, the bridge is Klang town’s latest amazement. We even managed to take snap of the Klang river itself.

After crossing the Klang river, you will land up near Hai O’s building adjacent to Jalan Kapar, about 2 1/2 miles from Klang town.

From there, a person can be connected to the various KL Highways which will take you to Kuala Lumpur, Subang Jaya and Petaling Jaya.

Presently, the bridge is not congested. As more and more learn about this new bridge, I am sure traffic will increase.

To end this story article about Klang’s 3rd bridge, do you know that Klang also has another bridge outside of town in Taman Cannought Power Station?

Before this new bridge was built, Cannought Bridge was in reality, a wooden bridge, which only allowed one vehicle to cross at a time.

I was told by a university mate of mine, Abdul Rashid, who resides in Taman Goodwood in South Klang, he was crossing this infamous bridge one night around 12 midnight.

Both driver had already traveled quite some distance. As such, neither was willing to back up or reverse.

There was actually no way both cars could pass each other. The bridge was definitely too narrow.

Both cars then came abreast each other. When both cars met, my friend Rashid turned his head to look at the driver of the white Volkswagen had no face at all!

Rashid told me he was shivering in his pants. His whole body trembled. He was in shock.

What was the apparition that he had witnessed that horrible night.

Sad to say, Rashid passed away a few years back of heart attack. Whether you choose to believe what I’ve related to you is up to you.