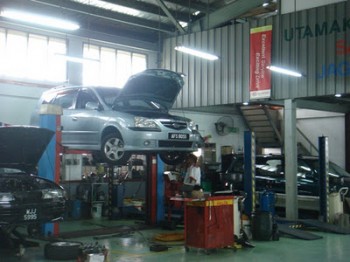 This blog, the “Driving School Malaysia”, is a unique blog indeed. It is a blog written specially for people who are interested in “all things pertaining to the driving school industry in Malaysia today.” I have up till today written, very surprisingly though; well over more than 500 articles, both in Bahasa Malaysia and English. I am very glad to announce, the blog now has a readership of well over 700 people per day.

Do you know that this blog’s leading article entitles, “JPJ Undang-undang Test Passing Tips” was read by well over 30,000 readers? Well, I’m sure you’ll agree that this infact is indeed a fantastic achievement.

Amongst the many topics covered by this blog, include for cars covers 1st Party Insurance and 3rd Party Policies as well. Besides insurance, this blog also emphasizes upon subjects such as courses a potential student has to go through in his or her quest to obtain a driving license.

The 5 hour Kursus Pendidikan Pemandu and the 6 hour Theory Courses on engines are but some of the few courses breached upon by me in this blog.
To only talk about courses and spare parts in this blog alone, without making a mention about the “men” responsible for the maintenance of our second hand vehicles will be rather grossly unfair. What am I trying to imply is, what about trying to write an article specially on the “mechanics” whom I have known all these years.

To tell you the truth, I’ve driving for quite some years now. To be exact, since 1970. This morning, it dawned upon me that I should pay a small tribute to some of the many mechanics I know since I was a young lad.
In writing this article, specially for the mechanics I know it is done randomly. No special preference is accorded to any one mechanic whatsoever.

It should be made known to readers, since getting my driving license, at a young age 24, I have been driving mostly second hand vehicles, Volkswagens, old Datsuns, Marinas, Fiats and other famous continental models. Without a doubt, such cars, being old, required the services of many of my mechanic friends.

To tell you the truth, I feel I should quote you a famous quotation once made by the well known opposition political figure, Y.B. Lim Kit Siang, at the Letchuman Hall, Klang, after his party’s landslide victory, many years ago.

The above figure, who is a very famous orator said, and I quote: “without you, the electorates, there is no me. And without me, there is also no this party’s success.” Very powerful words, this writer feels.

So in fairness to my mechanic friends who years ago helped me, I feel I owe them a lot for the services they have rendered me all these years.
One of the mechanics I still remember even up till today must surely be “Wah Chye” who is now over 65 and still alive. The above mechanic, a personal friend of mine, likes to dabble in a few rounds of “mahjong” even today.

Wah Chye, was infact trained by the then “Champion” Motors group companies. Champion motors, was once the franchise holders for Volkswagen and Audi cars in Malaysia in those days. What I like about this mechanic, Wah Chye, is, he is ever ready to help whenever he can.
Even if one has some mechanical problems, at night, Wah Chye is sure to come to your assistance. His “charges” or “services” are reasonable.

Unlike other mechanics around, he is not a “cut throat”, so they say unfortunately what I know about Wah Chye is that this mechanic today, is currently suffering from acute “arthritis”. He now walks with a limp and his movements are restricted.

Other than that, I would say, Wah Chye, my mechanic friend, whom I’ve known for well 30 years, is still OK, god bless him! Incidentally, Wah Chye has 4 children, 2 boys and 2 girls in all. He is also a “datuk”, or grandfather.
The second mechanic, also a personal friend of mine, is none other than “Ah Lau”.

Infact, Ah Lau, was actually a friend of my father, Yap Thian Yew, or “Say Bah”, who was a lorry driver. Malay friends and fellow lorry drivers call my father “Abah” or in Bahasa Malaysia, “father”. Whenever his friends greet him “Abah”, my father would jokingly retort, “good son, you know how to accord your father the proper respect whenever you meet him. Good boy, keep up the good behaviour.” My father would usually say.

As Ah Lau is my father’s good friend, without a doubt whenever I was faced with some mechanical problems with my old “jalopy”, be it a Volkswagen 1200 or Fiat 600 second hand car, my father would, suggest that I seek Ah Lau’s expert services. To be fair to Ah Lau, he represents one of the best mechanics around. His knowledge about cars is very good. He is to me, the best there is.

Maticulate and careful, he takes his work seriously, washing the parts used carefully, his “forte”, I would say, is engine tuning and timing. In these days when computer tuning was yet to be heard of, Ah Lau’s ability to adjust your engine perfectly was reknowned. No one, can safely verify, can “time” an engine better than Ah Lau can.

As the saying goes, if you want the best mechanic around town, you must be ready to pay through your nose. Another popular saying reiterated, “gives peanuts and you’ll get monkeys”. Although Ah Lau is reputedly one of the mechanics available around the vicinity of Klang district, his charges, unfortunately will make your “knees” shiver or in layman language, “shock the lights out of you”. But as I said earlier, Ah Lau is the best around.

Ah Lau, I hear, is still working as a mechanic even today. Ah Lau should now be well over 70 years or more than today. According to Ah Lau’s younger brother, Lai Onn, 70, who happens to be a good friend of mine, Ah Lau, albeit his movements are restricted, still tinkles with minor repairs such as changing plugs, air filters and brakes from time to time.

One thing I should tell readers about mechanics is that most of them possess hobbies. The 1st mechanic, Wah Chye, whom I described earlier, was a “mahjong” kaki or “enthusiast”. Well, Ah Lau, was a “kaki pancing” or a “fishing” enthusiast?

Ah Lau likes nothing better than going fishing in places as far off as Perak, Johor and Negeri Sembilan on Sundays and public holidays. What type of fish does Ah Lau fancy angling? Well, the story goes that Ah Lau, does not go to the “seas”. He fishes in old tin mines. The fish that he is reputed to catch are “haruans” and “ikan keli” or “inspector’s” fish.

Well, so much about Ah Lau, my second mechanic friend whom I’ve decided to highlight today in my special articles on “mechanics” friends of mine.
One other mechanic friend of mine whom I feel I should make mention of would be a young mechanic, whom I made acquaintance with when he was then 16 years old. Our friendship has stretched well over 30 years now. To be exact, we know each other since 1970.

This young mechanic, Ah Keng is a Cantonese boy. His real name is Lum Wai Keng. Ah Keng today is well over 40 years. Ah Keng is a small, thin sized man, married and has a son about 12 years.

Ah Keng, married quite late. I know Ah Keng as a nice, young man with few bad qualities, such as heavy smoking and gambling. Ah Keng, is a responsible husband and a caring father. He likes no better than talking to me about his only son, who is now in standard two, I think.

Ah Keng, my mechanic friend is well known to his friends and colleagues as “The Snake”, or “Chuah” in Hokkien. “Snake” to the Chinese people, denotes “someone who is untrustworthy and therefore cannot be believed in.” but, Ah Keng, infact, is no such character or person.

Then why on earth do friends and business associates brand him as the “Snake”. You see, Ah Keng’s mobile phone happens to end with 9831. The number 9831 in Chinese gambling circles, is “snake”. What better way to remember a person, whatmore a mechanic, than to remember him via his mobile phone number 9831 or the “snake”. So, in short, Ah Keng my friend is called “The Snake” or “Chuah” in Hokkien dialect.

I was the one responsible for getting Ah Keng his driving license when he was 17 years old. I remember taking Ah Keng to Petaling Jaya for his practical test, way back in the 1960’s or 70’s. I was then not involved fully as yet as a driving instructor. I remember using a Volkswagen 1200 to teach this mechanic how to drive and do side parking.

As a mechanic, he was very adept in driving. I did not have to teach Ah Keng many lessons at all. He infact passed with “flying colours” in his the first attempt. I actually taught Ah Keng for free. I did not charge him anything at all.

Do you know why I have a very close relationship with Ah Keng, my mechanic friend? 24 hours a day or anytime at all, whenever I called or needed his mechanic assistance, Ah Keng, believe me, will without fail offer his services to me. That’s the kind of “bond” that exists between, this “instructor” and his mechanic, Ah Keng.

Ah Keng has been a mechanic for many years now. He is full of experience. He’s good at “modifying” parts which are sometimes not available. His “charges” maybe on the high side, but nevertheless, he is good at what he does. I for one, do not mind him charging higher fees on his services. I feel satisfied with the type of services he provides.

I have many more mechanic friends who have yet to be highlighted. It looks as if they will have to be talked about in another article some other time. Mechanics like part timers Abbas, who passed away just recently and Raman, from nearby Taman Sentosa, are but some of the many other mechanics who have provided me good services especially where repairs are concerned.

To all of them, I would like to extend to them my thanks and gratitude. As they say, without all of you (mechanics), I would be lost! You have all contributed a lot to the upkeeping of many of my second hand “jalopies” I used years ago. Once again, thank you all!