Goods Driver’s License (G.D.L.) is a driving license that is intended to allow drivers of vans and lorries to ferry or transport goods belonging to companies or factories from one place to another.

P.S.V. on the other hand means Public Service Vehicles.

To drive a bus or taxi in our country, the authorities possess a law whereby its drivers should have this vocational license.

Failure to own such a license therefore is an offense. 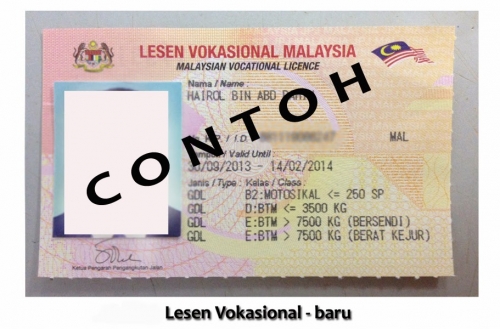 Basically, G.D.L. and P.S.V. licenses can only be attained by:

ii) A Malaysian citizen only. Foreigners cannot therefore apply for such a license.

iii) Have a full driving license.

A “P” or provisional license holders will therefore be unable to apply for it.

There exists many other requirements that a driver should possess before he can apply for vocational license.

For the time being, only the above requirements are mentioned.

Other requirements will be touched upon at a later stage.

Why does the J.P.J. authorities insist that vehicles carrying goods and public service vehicles such as taxi and buses be driven by such professional people only?

In short, such vehicles as mentioned above demand that its drivers who are competent and capable of handling such vehicles.

Ferrying goods and transporting passengers from one destination to another is both dangerous and the safety of bus and taxi passengers is likewise immensely vital to the authorities concerned.

Besides, a 6 monthly compulsory inspection by the Puspakom authorities, vehicles such as lorries, vans, taxis, school buses, public buses, chartered tour bus and trailers, to name but a few, are sent for inspection to determine their mechanical road worthiness.

Vehicles that fail Puspakom’s stringent checks are not allowed on the roads.

In my opinion, the inspection is definitely a wise and good move.

Such stringent checks should not be considered as an inconvenience, but rather as a necessary evil for the safety of the Malaysian public and road users as a whole.

Besides inspections by Puspakom authorities, spot checks and road blocks by both J.P.J. authorities and the police are frequently carried out.

Checks upon lorries, taxis and buses are done all the time.

These checks should in fact be applauded.

In the above spot checks, brakes, tyre conditions and most importantly, smoke emissions, especially by diesel powered vehicles come under frequent inspections by the authorities.

Another thing that is frequently under the authorities’ surveillance is the presence of fire fighting equipment and emergency triangles which public service vehicles are expected to have.

All these equipments ensure the safety of these public vehicles.

Vehicles such as these, if they are not equipped with them, should be summoned for contravening the authorities’ stringent requirements.

But unfortunately, such checks on public service vehicles alone cannot help to prevent or lower the rate of accidents in Malaysia.

Something else more important, however, needs also to be taken into account as well.

As I have mentioned, driving public service vehicles like taxis and buses, goods carrying vehicles such as vans, lorries and trailers, should ideally be in the hands of those who have G.D.L. and P.S.V. licenses, which are considered as professional vocational licenses.

But one further requirement that is to be expected of the above drivers is the responsibility of driving these vehicles on the road well. G.D.L. and P.S.V. should ensure that they drive such vehicles safety and in a responsible manner.

Being huge and big vehicles, they should see to it that they ideally give way to smaller vehicles like cars and especially motorcyclists on the road.

There are few things I would like to advocate to G.D.L. and P.S.V. holders to do.

Do not at any time beat the traffic lights.

This is the most dangerous of all traffic offences which can be committed by a vocational license holder.

Do not forget that!

In a nasty accident, which took place just recently, 3 close friends perished in a tragic accident.

It was reported to have taken place in Jalan Haji Sirat, near Taman Klang Utama which is near Klang town.

Either the car driver or the lorry driver was reported to have beaten the red traffic lights then.

In this case, I sincerely hope it is not the G.D.L. license holder who has beaten the traffic light this time around.

Should the G.D.L. lorry driver who is responsible for the above accident, then J.P.J. authorities stringent requirements for securing such a vocational license would have gone to waste.

All effort of the Road Transport Authorities would have gone down the drain.

To end this short but important article, being a driving instructor with over 40 years of experience and has also been involved in the Kursus Pendidikan Pemandu (K.P.P.) or defensive driving courses for many years now, my effort would have also ended up in a nought,

In short it would all have been wasted, so to say.

Just imagine, lecturing 5 hours per lecture on road safety and how to prevent road accidents from happening for 30 years, and finally to have a driver go on to beat the traffic light in seconds, is indeed a sheer waste of effort.